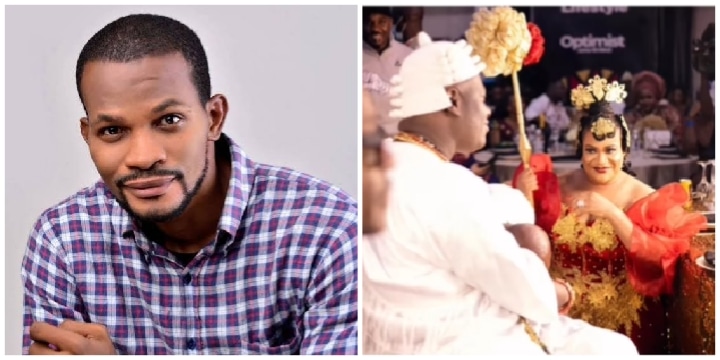 Controversial Nollywood actor, Uche Maduagwu has reacted to a request from his colleague Nkechi Blessing Sunday pleading with the Ooni Of Ife, Oba Enitan Adeyeye Ogunwusi to make her one of his queens.

Naija News reports that Ooni has been making news headlines following his serial marriages to his new queens. Taking to her Instagram page on Saturday, Nkechi declared her interest in becoming one of the wives of the Yoruba monarch. She added that she is eagerly waiting for her turn. She wrote: “Ooni of Ife Sir, I am patiently waiting for my turn thank you in advance, sir… you can reach me through @idrisconnect.” Reacting to his colleague’s request, Maduagwu opined that Nkechi is not the kind of lady the monarch is looking to make his queen. Resharing a photo-shopped image of Nkechi kneeling beside the Ooni, Uche stated that the Ooni is looking for an Olori and not a radio without a battery. He added that some actresses don’t “read adverts” properly. See his post below……

Former Big Brother Naija housemate, Nina Onyenobi aka Nina Ivy has replied to controversial actress, Nkechi Blessing following her statement after her alleged first marriage crashed. Naija News reports that Nina, a popular housemate in the BBNaija 2018 edition, married her American lover, Chris Miller shortly after her alleged marriage to one, Anthony crashed. It would be recalled that Nina Ivy traditionally tied the knot with Anthony, who reportedly didn’t show up at the traditional wedding in 2020. Nina and Anthony had welcomed a child together but went their separate ways shortly after she relocated to America. Reacting to Nina’s new marriage to her American lover, Nkechi Blessing, in an Instagram post on Friday, noted that the reality star’s marriage crashed despite the fact she kept it very private and out of sight. She further urged her fans to do ‘them’, adding that the world will adjust when the need be. Replying to  the statement via the comment section of an Instagram blog, the Imo-born star slammed the actress for using her name to clout chase on social media. She wrote: “Not everything is for ur clout, plus u know absolutely nothing about me, you can only deed off social media news so plz shush”. [Sic]