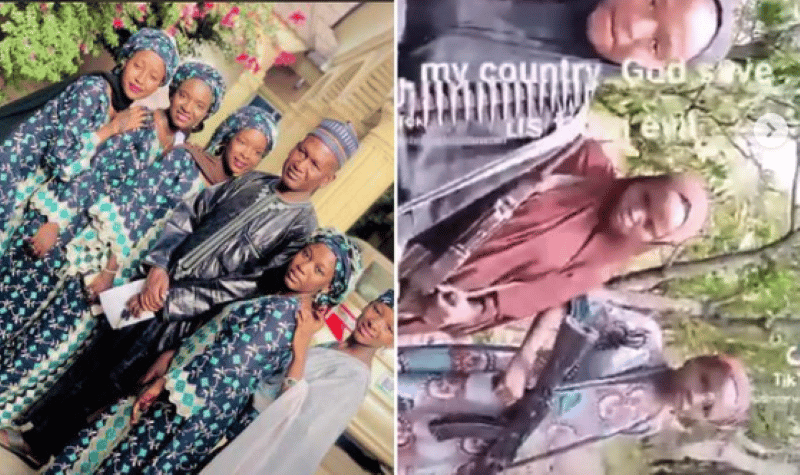 Terrorists on Monday released a video of the abducted daughters of the former Account General of Zamfara State, Abubakar Bala Furfuri.

The terrorists in the video threatened to turn the two daughters and domestic staff of Furfuri into criminals. According to the insurgents, the abductees would be used to attract other targets if their parents fail to meet their demands Furfuri’s children, Zulaihat and Zainab and the domestic staff whose name was not revealed have been held by the terrorists for 128 days. The three ladies in the video which lasted for 2:39 minutes were seen bearing arms and ammunition. In the video, one of the terrorists could be heard telling the girls that their parents think the issue is a joke or lie. He further stated, “we are not even after the money. We’ll just use you and increase our number of fighters or use you as new targets.” Another terrorist interrupted and said, “tell them if they don’t cooperate, we will keep disgracing you.” According to Premium Times, one of the daughters of the former Accountant General of Zamfara State, Zulaihat in the video pleaded with their father to use every means to gather the ransom and free them from captivity. Zulaihat said, “My name is Zulaihat from Zamfara, “Please father if you see this video help and save us from this situation. “We’re in a critical condition living here. Disregard those advising you against paying the ransom, please. Please don’t allow us to add another day in this condition. “They threatened to give us something that will make us forget you and you may never see us. Please, save us from this condition. They said they would take us away from here. They said we would show them the houses of rich people and we’ll go to schools with them (to abduct pupils). Please help and save us from this situation.” Another terrorist at that point said, “tell him (the father) that he shouldn’t cooperate if he wants you to continue in this situation.” A family source that spoke with Premium Times said the family has seen the video. The source said, “He has given millions of naira to the bandits after which they released some of the captives, including one of his daughters and other relatives that were abducted with Zulaihat and Zainab. He doesn’t have the money they’re asking for now.”