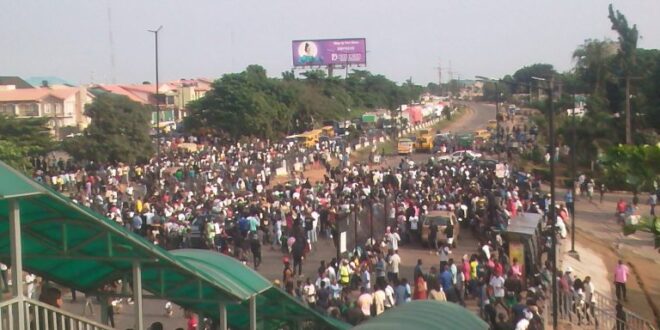 There was tension on Monday in Abuja, the Federal Capital Territory (FCT) as Nigerian youths demanding an end to police brutality attempted taking the #EndSARS protest to the Presidential Villa.

It was reported that the Presidential Villa also known as Aso Villa or Aso Rock Villa is the workplace and official residence of the President of Nigeria since 1991 when Nigeria moved its capital from Lagos to Abuja.

Operatives of the Nigeria Police Force (NPF) intercepted the protesters at the John Kennedy Street as they attempted to march through the back gate of the Presidential Villa.

The protesters are demanding a total scrapping of the Anti-Robbery Squad, SARS; an end to police brutality; reformation of the police; and an end to extra-judicial killings.

The police officers, in an attempt to disperse the protesters gathered at Power House in Asokoro and fired teargas.

Soldiers had earlier taken over major streets and strategic points in the FCT.

The police have also stationed its personnel in front of CBN headquarters with Armoured Personnel Carrier and water cannons ready.