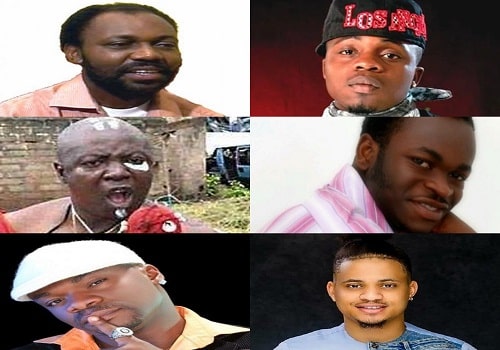 He was a talented young rapper who died on Thursday, April 22, 2010, after he was involved in a ghastly motor accident in front of Alakara Police Station, off Agege Motor Road, Mushin, Lagos. Dagrin’s real name was Olaitan Olaonipekun, died at the age of 22. MC Loph:

MC Loph was known for the song Osondi Owendi where he featured Flavour. He was on his way to his village along with his elder sister for his traditional marriage when their car suffered a ghastly car crash and they died. He died on September 14, 2011. CD JOHN

The young comedian, Chijioke John was pronounced dead on March 24, 2011. He passed on at St. Nicholas Hospital, Lagos after a fatal car accident while returning from Harrysong‘s debut album listening party in a convoy of three cars. AHMED ISHOLA DUROJAIYE:

The Yoruba actor, Ahmed Ishola Durojaiye, popularly known as Alasari, died on March 20, 2011, at Federal Medical Centre (FMC), Abeokuta, after a ghastly accident he was involved in along Lagos-Abeokuta expressway. JT TOM WEST:

The 41-year-old Nollywood actor died three three days after he was involved in a ghastly accident. He was returning from a movie location after a late night shoot. He died on September 28 2006, three days after the accident at the Ikeja General Hospital, Lagos, due to internal bleeding. Rico Swavey:

Big Brother housemate Patrick Fakoya popularly known as Rico Swavey died on Thursday, October 13, 2022. He was involved in an accident on Tuesday, October 11, 2022. His friend and co-housemate Alex Asomugha aka Alex Unusual announced the unfortunate incident.