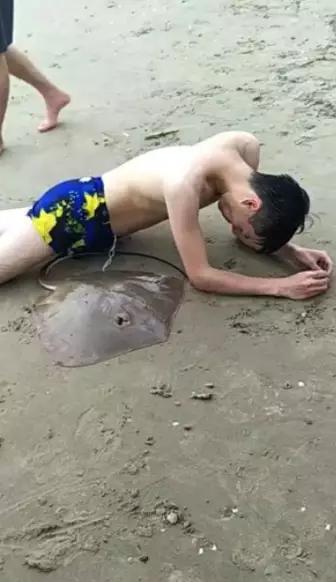 In a bizarre incident, a man in China got stung by Stingray on his genitals while swimming. The accident took place at Hainan resort city of Sanya were a tourist got attacked by a marine animal and his tail got hooked into his shorts. The video of the man was shared on social media and it went viral in not time.

In the video footage, the man was seen being surrounded by worried onlookers who called for help. The stingray which is known as ‘devil fish’ in the region is often found in shallow waters hiding under the sand. According to Chinese media, it stabbed the man as he went to take a dip in the waters on Saturday.

Firefighters and paramedics arrived on the spot but they where not equipped with the tools which could remove the bard, reports Metro UK.

He was then rushed to a nearby hospital for further treatment. “At present, the young man’s physical condition is relatively stable and there are no other problems,” the report added.