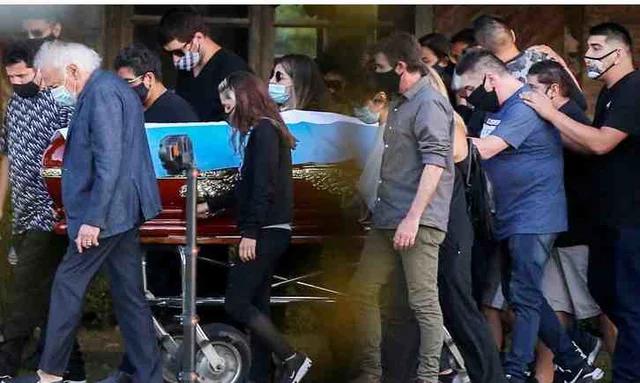 Diego Maradona has been laid to rest after thousands of fans lined the streets of Buenos Aires to pay their respects as his coffin was driven to the cemetery on Thursday.

The 1986 World Cup winner was taken to the Bella Vista cemetery on the outskirts of the capital – where his parents are buried – for a private ceremony attended by family and close friends.

Maradona died of a heart attack aged 60 on Wednesday just two weeks after being discharged from the hospital for a bleed on his brain.

Thousands of fans packed the streets around the presidential palace where Maradona lay in state on Thursday and thousands more lined the highways in the afternoon to catch a glimpse of his hearse as it rolled past surrounded by police vehicles.

On Thursday, hundreds of people began filing in to see the coffin of Diego Maradona in Buenos Aires’ Casa Rosada after he passed away on Wednesday at the age of 60. People passed in front of the coffin that was draped with the Argentine flag and his number 10 jersey.

Maradona’s family and closest friends came at dawn before the start of the public wake. Tens of thousands of people spent the night in a vigil in the Plaza de Mayo, singing songs in tribute to Maradona, who led Argentina to the World Cup in 1986.

Scores of people, with scarves and Maradona’s shirt, gathered outside Napoli’s stadium and chanted “Diego, Diego, Diego!” Napoli’s blue and white have been hung on the fence, transforming it into a makeshift shrine to the city’s adopted “king”

“You are eternal in every heart in world football,” the Twitter account of the Argentina national team posted alongside a picture of Maradona holding the World Cup.

Maradona’s daughters Dalma, 33, and Giannina, 31, by his first wife and childhood sweetheart Claudia Villafane, were seen wiping tears from their eyes as they left for the funeral.

It comes after passions boiled over outside the palace when a mile-long column of fans arrived to pay their respects to the Argentinian hero but were blocked off by riot police.

Due to the sheer numbers, many were unable to throw their football jerseys and flowers by Maradona’s coffin and so they scrapped ferociously with heavily-armored police as if attending a football derby.

‘He was someone who touched the sky with his hands but never took his feet off the ground,’ the president said.

Fans wept and blew kisses as they passed the wooden coffin, some striking their chests with closed fists and shouting, ‘Let’s go, Diego.’

It was draped with the Argentine flag and shirts bearing his famed No. 10 from the national team and the Boca Juniors club, with other jerseys tossed around it by passing admirers.

Open visitation began at 6:15 a.m. after a few hours of privacy for family and close friends. The first to bid farewell were his daughters and close family members.

Jana Maradona, who the player recognised as his daughter only a few years ago, also attended.

Then came former teammates of the 1986 World Cup-winning squad, including Oscar Ruggeri. Other Argentine footballers, such as Boca Juniors’ Carlos Tevez, showed up, too.

Early in the morning some fans grew impatient as police tried to maintain order, and began throwing bottles and pieces of metal fencing at officers outside the presidential offices in the heart of Buenos Aires. Police at one point used tear gas to try to control them.

Interior Minister Wado de Pedro said he was upset over what he called the ‘craziness’ of police actions against fans. ‘This popular tribute cannot end in repression and running of those that came to say goodbye to Maradona,’ he said.

President Fernandez appeared at midday and placed on the casket a jersey from the Argentinos Juniors team, where Maradona started his career in 1976