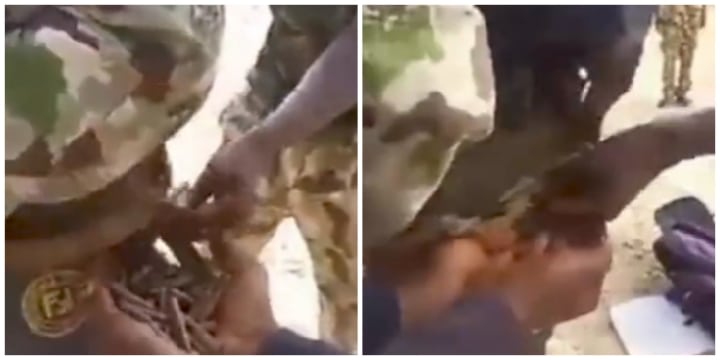 A video making the rounds on social media has shown the moment an unidentified Nigerian soldier was being stripped of bullets which he plans to allegedly supply to bandits.

In the video shared online by Goldmyne TV, the soldiers who are attached to the operation Hadin Kai 156 Task Force Dake Battalion Mainok are seen stripping bullets which were hidden on the body of one of their colleague. They accused the soldier of planning to supply the ammunition to Boko Haram who may later turn around and use it to attack them.

Below are some reactions to the video, Beatz, “He is not paid well he has to look for another avenue to make extra money” Lin4me, “God will continue to expose your kind and let them question him well because he can’t be the only one from the camp.” Ezchi, “Why is that nigerian Army is always like this.” Nelson, “Sometimes the government is not the enemy of this country.” Barbara, “All I see here is Nigeria do Nigeria.” King, “Make una ask am people wey send am.” Annie, “When bandits is being recruited into the army as soldiers what do you expect” Kings bride, “Sadly this guy is my course mate, we trained together in the army.”