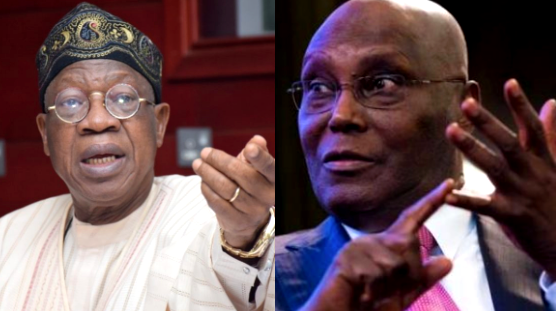 The Minister who spoke at a news conference in Abuja on Thursday morning warned that an uncontrolled border would lead to the return of snuggling of food and weapons into the country and worsen hunger and insecurity.

Mohammed asked Atiku, who is the Presidential candidate of the PDP to bury the thought of an open border in Nigeria to prevent associated challenges, which the Buhari administration has curtailed.

The Minister said: “Permit me to use this opportunity to respond to the unfortunate comment credited to His Excellency, Former Vice President Atiku Abubakar, during his campaign stop in Katsina on Tuesday, that he will reopen all Nigerian borders if elected President.

” By that statement, Alhaji Atiku has simply informed Nigerians that he will reverse all the efforts made by the PMB Administration to achieve self-sufficiency in the production of many staples, especially rice. By that statement, the former Vice President has informed the country’s millions of rice farmers that they will soon lose their jobs when imported rice floods the country. By that statement, His Excellency Atiku Abubakar has told the hundreds of thousands of Nigerians working in the various rice mills that have sprung up under this Administration that their jobs are over.

By that statement, Alhaji Atiku will shut down most, if not all, of our new fertilizer blending companies, with thousands of jobs going down the drain. And by his declaration, the former Vice President has told Nigerians that he will worsen security in the country by allowing arms and ammunition to flow unhindered into the country.

” In case His Excellency Atiku Abubakar is not aware, the PMB Administration has increased the number of fertilizer blending plants in the country from 10 in 2015 to 142 today; the rice mills in the

” His Excellency Atiku Abubakar may also want to know that while Nigeria was the number one export destination for rice in 2014, our country has now moved to number 79, according to Thai Authorities. By throwing open the borders indiscriminately as he has pledged, Alhaji Atiku Abubakar has simply announced that he intends to return Nigeria to the number one importer of Thai rice in 2023!

“It is now clear that in his desperation for power, the presidential candidate of the PDP will not hesitate to export Nigerian jobs, put millions of Nigerians out of jobs, and ruin the fertilizer companies and the rice mills that have grown exponentially in number since Nigeria shut its land borders in 2019 (with some of them later reopened) due to the smuggling of rice as well as arms and ammunition into the country.

“For sheer expediency, Alhaji Atiku, a former Customs Officer who rose to the pinnacle of his career, is ready to erase the gains made since 2015 in pushing Nigeria closer to self-sufficiency in the production of staples.

“Out of desperation, he is ready to worsen the security situation in Nigeria by throwing open all the borders and allowing a massive inflow of small arms and light weapons into the country. Only an inordinately-ambitious candidate will wish to return Nigeria to an era of massive importation of food, to the detriment of local farmers, and an era of unbridled inflow of weapons.

This is a red flag to Nigerians who, in line with the admonition of President Muhammadu Buhari, have been striving to produce what they eat and eat what they produce,” Mohammed said.