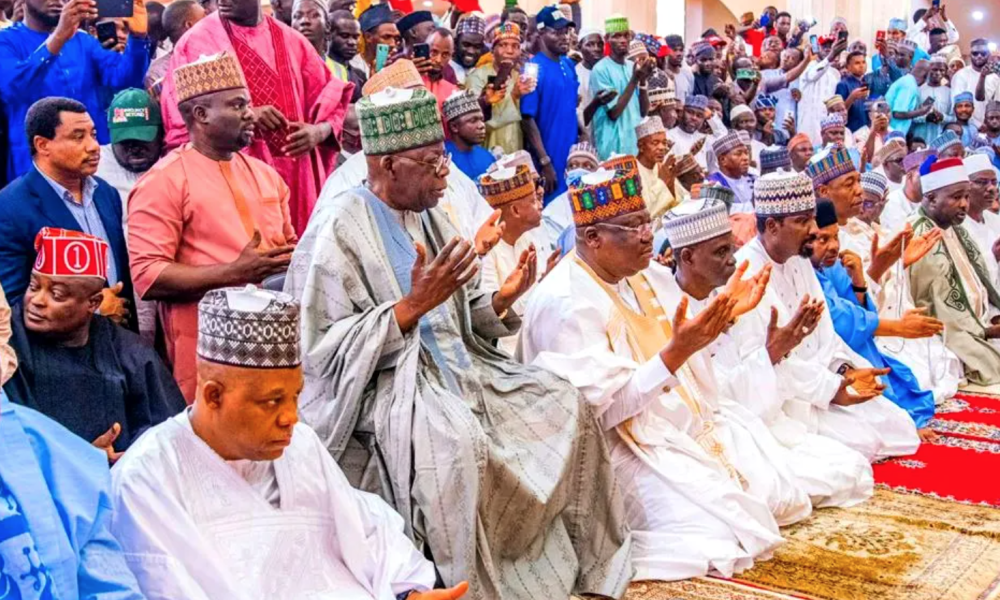 The presidential candidate of the All Progressives Congress (APC), Bola Tinubu and his running mate, Kashim Shettima have been seen performing Juma’at prayer on Friday at the wedding ceremony of Senator Ali Ndume’s daughter.

The APC flagcbearer with some party stakeholder’s graced the ceremony to celebrate the Fatiha of Muhammad Abdullahi Gumel, son of Senator Gumel and Kaltum Mohammed Ndume, daughter of Senator Ndlume at the National Mosque, Abuja.

Tinubu’s visit to Senator Ndume’s daughter wedding is coming days after telling the party’s women to tell Nigerians demanding for change of government to ‘shut up their mouths.’

Tinubu made the statement on Monday while speaking at the launch of the women’s team of the APC presidential campaign.

See photos from the event;

Meanwhile, supporter of the Peoples Democratic Party (PDP) and rights activist, Shehu Mahdi, has said that the presidential candidate of the All Progressives Congress (APC), Bola Tinubu cannot be trusted.

Naija News understands that Mahdi said this in reaction to Tinubu’s address during the inauguration of members for the women’s presidential campaign team chaired by his wife, Oluremi Tinubu.

Speaking at the event that was held in Abuja earlier this week, Tinubu said: “Assurance is here, the promise is here, prosperity is here, health is here, security is here, banditry has ended”.

Reacting to the former Governor of Lagos State’s comment, Mahdi who is a staunch supporter of PDP’s presidential candidate, Atiku Abubakar, said Tinubu’s followers would be disappointed after the 2023 general elections.

“If you believe BAT, then you can as well believe anything. With everything about him shrouded in the coat of doubt, suspicion, and uncertainty.

“Huge disappointment from Tinubu awaits those believing him,” Mahdi said via his microblogging platform, Twitter.