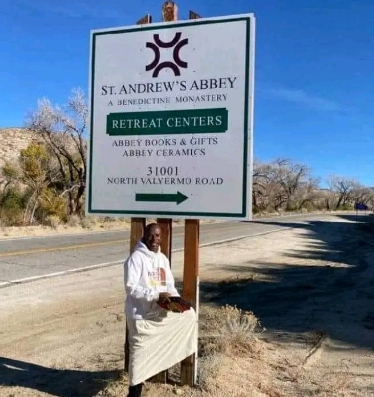 The spiritual director of the Adoration Ministry, Enugu, Ejike Mbaka, has shared a video of himself at St Andrew’s Abbey, Monastery in Los Angeles, United States of America.

In the video, Mbaka said, “Officially I have entered into St Andrew’s Abbey, Monastery in Los Angeles, Valyermo.”

Mbaka had been ordered to head to a monastery by the Catholic Bishop of Enugu Diocese, Most Rev Callistus Onaga, in early October.

Speaking at his Adoration Ministry, Enugu Nigeria, on Wednesday program, Mbaka declared that Peter Obi can never be Nigeria’s President

Mbaka, who was categorical in his assertion, said unless God ceases to exist, Obi would never smell the seat of the President.

He noted that Obi was too stingy to be Nigeria’s president, adding that it is better to have former vice president, Atiku Abubakar, as president

Consequently, the statement as expected generated a backlash that the Catholic Bishop of the Enugu Diocese, Callistus Onaga via a press release on June 2022 ordered the temporal shutdown of the Adoration Ministry, Enugu, Nigeria, Amen.

This was a sequel to the controversial comments, which were described to be contradictory to the ethics and directives of the church.

To further avert unforeseen circumstances, especially toward the 2023 general election, the Bishop ordered Fr. Mbaka to embark on a retreat at Monastery.

Reverend Fr. Camillus Ejike Mbaka is as of today at St Andrew’s Abbey, Monastery in Los Angeles, United States of America, equipping himself for the tasks ahead.