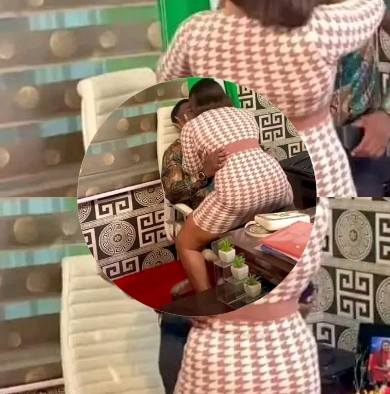 People have been astonished following a series of photos of a self-acclaimed Prophet engaging in immoral acts with another man’s wife while allegedly carrying out an exorcism.

The Prophet was said to be on deliverance prayer from the spirit of barrenness on the lady when the scene turned into a reaping and harvesting session at his office.

In virile photos on social media, people couldn’t hold on to throwing tantrums at the said man of God, who finds pleasure in reaping where he did not sow.

Some commentators have suggested that the Prophet be castrated and banned from further activities as a man of God, while so many people blame the lady who is ruined in desperation to get kids.

However, the incident according to some critics is one among numerous cases going on behind the scenes at several houses of worship in the country.

“This is one of the End Time Prophets who doesn’t pay attention to the aftermath of their actions but focuses on the immediate pleasure of the world.” Said Critics

The ‘Prophet’ was Caught On Camera Doing Something Else While Trying To Remove the Spirit Of Barrenness From Lady After years of marriage.