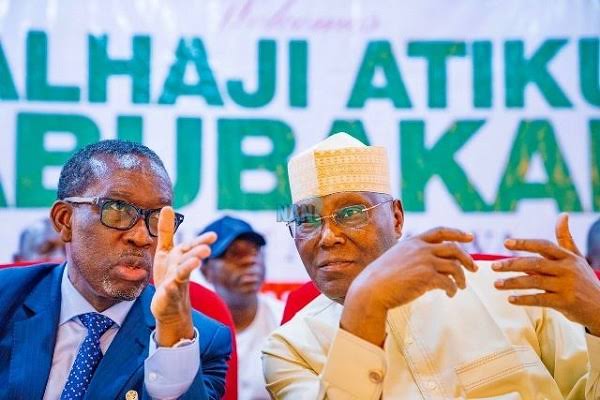 The Kaduna State chapter of the Peoples Democratic Party (PDP) has announced the postponement of a planned consultative visit of the presidential candidate of the party, Atiku Abubakar, and his running mate, Ifeanyi Okowa.

Naija News gathered that Atiku and Governor Okowa of Delta State were scheduled to visit Kafanchan on Sunday, October 16, 2022. But the postponement of the planned visit was made known to newsmen in a statement on Saturday by the Kaduna State PDP chairman, Hon. Hassan Hyat. Hyat explained that the postponed planned visit was as a result of consultations with political stakeholders and religious leaders of the zone wherein the stakeholders resolved that a new date would be most suitable for the planned visit. “The PDP regrets any inconveniences this change might cause and assures the good people of Southern Kaduna of Atiku’s commitment to meeting with the leaders and people of the zone as soon as a new and convenient date is fixed,” the statement partly read.

2023: Atiku To Face Northern Elders, ACF, Others In Kaduna

Atiku is also scheduled to meet with the Northern Elders Forum (NEF), Arewa Consultative Forum (ACF) and other Northern groups in Kaduna. In a statement on Friday by Atiku’s media adviser, Paul Ibe, the former Vice President will be hosted at the Arewa Joint Committee interactive session on Saturday at the Arewa House in Kaduna State. Ibe said the event is organised in order for the Northern elders to review the policy ideologies of presidential candidates of the major political parties in the country. He said Atiku would meet with the groups at 1:00 pm, stressing that the dialogue is an event scheduled on the campaign timetable and a rally is to follow on Monday in the state. Ibe asserted that the event is another chance for the PDP presidential candidate to showcase his policy document to the Northern leaders and Nigerians. He said: “The dialogue promises to be another opportunity for the PDP presidential candidate to relay his policy document titled, ‘My Covenant with Nigerians’ to the audience at the event.” Naija News reports that the interactive session is organised by several groups, including Arewa House, Sir Ahmadu Bello Memorial Foundation, Arewa Research and Development Project, ACFand NEF among others.