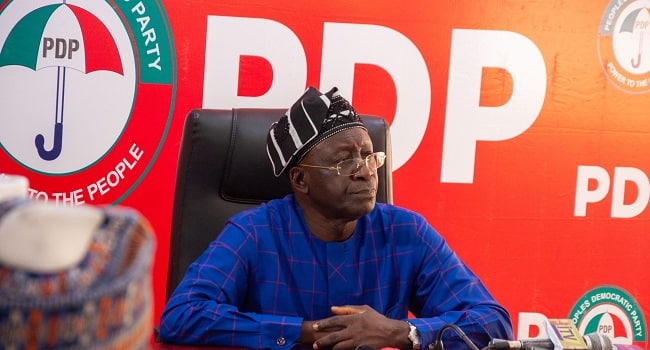 The Board of Trustees (BoT) of the Peoples Democratic Party (PDP) has today disclosed that the party’s National Chairman, Iyorchia Ayu, would resign after the forthcoming general elections.

The BoT has however asked Ayu to give firm commitment that he will resign after the general election next year. According to the PDP BoT Chairman, Adolphus Wabara, he said the Sokoto State Governor, Aminu Tambuwal, who is also the Chairman of the PDP Governors Forum, was called upon to summon an emergency meeting. Naija News gathered that Wabara, who spoke at a press conference in Abuja on Friday, said the Board has decided that all party leaders and close allies would, going forward, not make any inflammatory comments or grant interviews on the issue. In the communique which resulted from the five hours closed door meeting, the BoT urged the party leadership to henceforth match words with action and where commitments are made to unconditionally fulfil same. The communique also resolved that the presidential candidate should review its appointments of members of the campaign council and other advisory appointments to make it all-inclusive. It furthered stated that, “The BoT will refer some of these recommendations for noting and appropriate action to NEC of our party in due course. “To urge the National Chairman as an eminent leader to give a firm assurance that he would resign his position after the 2023 elections.”