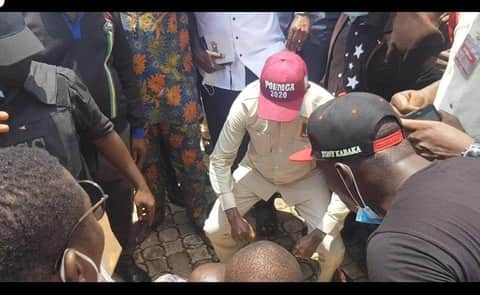 It is showtime in Benin City as Adams Oshiomhole is back in town to join in the campaigns for the Edo forthcoming Governorship election.

Comrade Adams Oshiomhole who addressed a mammoth crowd of youths who thronged the residence of the APC Gubernatorial candidate, Pastor Osagie Ize-Iyamu, pleaded for forgiveness in selling a bad product in the person of Obaseki in the 2016 Governorship election.

Adams Oshiomhole took his time to list his legacies as well as list the failures and inability of Obaseki to meet his promises made to the people of Edo State in the 2016 election.

Adams Oshiomhole urged the youths to vote out Obaseki and make sure they defend their votes.

Going Going Gone… Oshiomhole said Obaseki has already seen the handwriting on the wall that his tenure can not be renewed.

He berated Obaseki for sponsoring thugs to the palace of the Oba of Benin to shoot at innocent people.

Asking if Guns were Kola nuts or gun local gin to present to the palace? Oshimohole took Obaseki to the cleaners.

After Adams Oshiomhole practically shredded Obaseki to pieces he ended the show with his traditional drama.