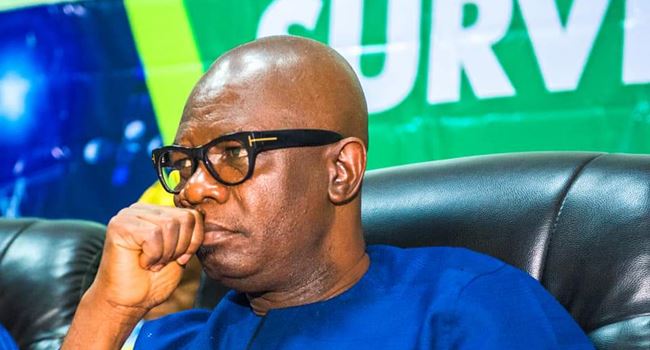 The Ondo State Deputy Governor, Agboola Ajayi, said on Friday he would not leave the Peoples Democratic Party (PDP) despite his defeat in the party’s governorship primaries held on Wednesday.

A former Attorney-General and Commissioner for Justice in the state, Eyitayo Jegede, defeated seven other aspirants to secure the PDP governorship ticket in the governorship primaries held in Akure, the state capital.

Ajayi dumped the All Progressives Congress (APC) for the PDP last month after his relationship with Governor Rotimi Akeredolu deteriorated.

The deputy governor, who confirmed his intention to remain in PDP in a statement issued by his campaign organisation, expressed happiness with his performance in the primaries.

The statement read: “He (Ajayi) proved that he is a grassroots politician by polling 657 votes, coming second in a contest amongst seven other aspirants, barely 30 days after rejoining the PDP.

“This is why commendations kept pouring in from the state and even from outside the state. It was a great performance, a great day for him and democracy.

“We are equally using this medium to state unequivocally that, PDP remains our party and we, therefore, want all our supporters to remain loyal to the party as we work towards the way forward.” this post was from Ripple newspaper.