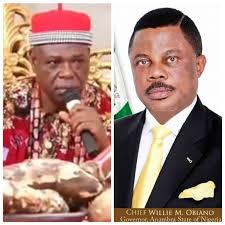 A statement signed by Mr. Greg Obi, Anambra state Commissioner for Local Government, Chieftaincy and Community Affairs quoting the powers given to His Excellency, the Executive Governor of Anambra State under Section 10 (B) of the Anambra State Traditional Rulers Law 1981, said the suspension is for a period of 1 year. It said the sanction may be lifted at the end of one year or renewed, or upgraded in the intervening period depending on government’s review of Igwe Uyanwa’s conduct.

The statement further directed Igwe Uyanwa to stop holding himself out as a traditional ruler, and to cease from discharging traditional ruler’s function in Ukwulu community, or elsewhere in the state and beyond.

Sources who spoke to the ABS say Igwe Ukwulu’s certificate suspension may be as a result of security reasons and petitions to the state government over his conduct.