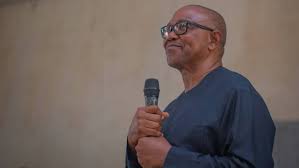 In a bid to decipher enduring panaceas to the myriad of challenges confronting the progress and development of Nigeria, various political aspirants ahead of the 2023 presidential election, including the Presidential candidate of the Labour Party, Mr. Peter Obi have blamed those in the helms of leadership circle as the cause of the lingering issues.

Peter Obi said incompetent people within the government are the bane of Nigeria’s developmental progress.

The Labour Party candidate noted that the development is creating problems for Nigeria in different forms.

He, however, expressed optimism that the country can be great again only if Nigerians should vote for the best candidates capable of resolving the issues of bad governance ripping the country apart.

Recall that as a former governor of Anambra state, Peter Obi has on different occasions compared the economy of Nigeria to other countries including China, the United Arab Emirates, United States of America, among others.

According to Obi, Nigeria can grow its economy without basically depending on the output of crude oil but via other sectors, including Agriculture, Steel, and Coal among other industrial hubs.

He believes that these when competent leaders are elected into office, would assuage the loopholes in the country and bring about progress and development across the states in Nigeria.

“We are all aware of the problems and the issues confronting us. Bad leaders. Insecurity. Corruption. Mismanagement of the incompetent people holding positions at different levels of government. Abject poverty amid plenty,” he tweeted on his handle.

“Ethno-religious crises. But all of these are mere symptoms. We see the manifestations, but the real problem is deep down. Every four years we attempt to treat the symptoms by electing the person who has convinced us that he is the solution to our woes. Then he disappoints us,” he added.