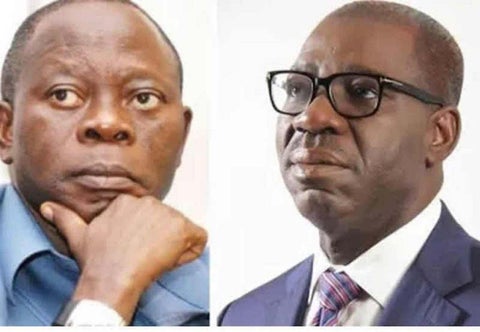 Governor Godwin Obaseki of Edo State on Tuesday, took a swipe at his predecessor and National Chairman of the APC, Comrade Adams Oshiomhole, describing him as one that has brigandage as his stock in trade and one who is scared of educated people.

The governor said this while speaking with State House correspondents at the Presidential Villa, Abuja, where he also disclosed that he has resigned his membership of the party and will soon disclose the political platform on which he will be seeking re-election in the forthcoming governorship elections in Edo State.

“They are scared that when people of substance, when people who are proven, when people who have succeeded in other aspects of life come into politics, they will be history. For me, this fight is not about grabbing political power, it’s not about me, it’s not about trying to prove a sense of importance, no. It’s for us, 21 years into this Republic, democracy must mature, but as democracy is maturing, we now need to begin to show that politics cannot and should not be the preserve of a certain character of people.

On his chances of winning election on another party platform, he expressed optimism that the people of Edo State will support his re-election.