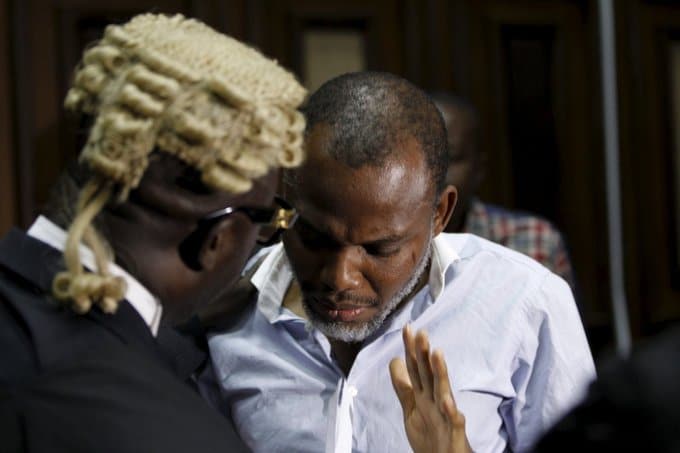 The Court of Appeal in Abuja has fixed October 13th, 2022, to deliver judgment in the case between the leader of the Indigenous People of Biafra, (IPOB), Nnamdi Kanu, and the Federal Government over charges of terrorism.

Naija News reports that the Kanu’s lawyer Ifeanyi Ejiofor, confirmed this on Wednesday via his Facebook page.

“We just received NOTIFICATION from the Court of Appeal Abuja Judicial Division, that the long-awaited Judgment in Onyendu Mazi Nnamdi Kanu’s Appeal No: CA/ABJ/CR/625/2022 BETWEEN: MAZI NNAMDI KANU VS. FEDERAL REPUBLIC OF NIGERIA, will be delivered tomorrow being the 13th Day of October, 2022, at 2pm,” he stated via his Facebook page.

It was earlier reported that Justice Binta Nyako of the Federal High Court had struck out 8 out of the 15 counts of terrorism-related charges against Kanu for either being repetitive or unsubstantiated by the prosecution.

The lawyer of the IPOB leader, Chief Mike Ozekhome SAN, approached the Court of Appeal seeking an order quashing the remaining seven count terrorism-related charges filed against his client.

But D. Kaswe, Assistant Chief State Counsel from the Chambers of the Attorney-General of the Federation, had urged the appellate Court to dismiss the appeal for lacking in merit.

A three-man panel led by Justice Jummai Hannatu, from Gombe Division is presiding over the case on Thursday.