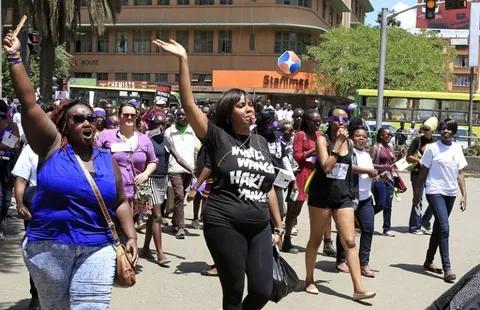 Research has revealed that some single women are now complaining due to over scarcity of suitors in the country. It is the desire of most ladies to get hooked to a man at certain age brackets for support, procreation and affection. But all around today, we have many single ladies with no suitors. There are many single ladies and as well as bachelors who would want to get married, but the fear of uncertainty of the future of the union have really prevented many from doing so owing to unpredicatable economic situation.

Reports showed that there were enough women and men who really wanted to get married but it appeared both sides do not want to gamble into it to avoid devastating consequences and regrets in the future. One of the ladies, who preferred to be simply called Titi said she had taken the issue of marriage as a do-or-die affair due to “internal pressure” but that as much as she had tried, frustration had often been the result. At 37, the businesswoman who sells clothes in Ikeja, the Lagos State capital in western Nigeria, disclosed that she is not finding life easy.

“What is happiness without a man in a woman’s life?”she asked our correspondent during a chat. She had dated several men with some promising marriage, but without fulfilling the promise.

“You can’t imagine that in the last three years, I have dated about eight men, but the relationship was often short-lived simply because I ask for their commitment.I am not getting any younger and I cry every time I see my mates with their husbands and children.If at 37 I don’t have a child or a permanent man, when would I have them? Is it when my skin has wrinkled? she asked our correspondent

Miss Karia Anumba, 41, lamented that she had lived and changed many cities in Nigeria looking for suitors but those she met were afraid because they were not sure of the future of the marriage. She revealed that she tried to convince and persuade the men she had contact with to make the move and even assured them that she would manage no matter the condition, but regretted that none of them agreed to marry her. Anumba said she quickly relocated to Lagos from Abuja when she realized that she was gradually turning into prostitute because of the drive for marriage.

She explained that since she came to Lagos, she had engaged herself with a work and was still searching for interested men but yet to get one. She narrated that some men who were above 40 years still roamed about and do not want to get married; attributing it to fear and economic condition as most of them were jobless.

Bose (surname withheld), 37, has found herself patronising many of the social interaction sites on the internet.The banker told our correspondent that she is on Eskimi, 2go, Badoo, Whatsapp, Facebook, Twitter as well as 4clique and Instagram just to look for life partner.

“We can’t tell the particular broom in the bunch that kills a fly,” she said on why she patronises such number of social interaction sites. “I always change my name in the different sites but the ultimate goal is to get a husband,” she added. Bose reveals that she is really worried about the situation, adding that she lives comfortably (in a mini-flat and has a car), “but who do I have to enjoy this comfort with me?

“I have tried a hook up programme on a Lagos-based radio station, but my age is now a major factor hindering my dream of being married,” she lamented pleading with our married correspondent, who she considered a bachelor, to “help dry my tears.”

A married woman, who gave her name as Mrs. Blessing Aguebor and resident in Oshodi, confirmed that the issue of lack of serious men for marriage is giving many ladies sleepless nights. She narrated the touching story of her friend who was disappointed by her boyfriend of five years when it was time to “settle down”.

“My friend was 29 when he met this man in Benin and they dated for five years. The man was always giving the lady hope without her knowing the man had other plans. The year he fixed for their marriage was the year he travelled abroad without even informing my friend. It was later he called her and asked her to find another man because he still had many more years to hustle. My friend almost went mad. She is 36 now without a man. I had to convince her to relocate to Lagos so that possibly out of the population here, she would find someone. It is pathetic,” she said.

A 38-year old business woman in Ketu, narrated how she lost her first husband to a friend, Idayat, who was desperate for a husband. According to Mrs. Adewunmi who remarried last year, Idayat was 36 and needed a husband but her search was endless.

“I was always encouraging her and made her a part of my family. She would always help me take care of the kids when I go to the market. With time, she took over my husband without my knowledge until the day I caught them red-handed and that was the end of my marriage. Ladies are like hunters these days,” she said.

Asked why she was not married at 34, Blessing, a nurse with a private hospital in Abuja, retorted: “that is why I’m on this social site. Why are you asking? Is it a bad idea if you propose to me?”

She explained that life was becoming unbearable without a husband.

“My friends and family members are aways asking when they would come and ‘chop’ rice, and I keep hoping,” she added.

A marriage counsellor in Lagos, Mrs. Victoria Aliu, told P.M.NEWS that scarcity of ‘real men’ is becoming a terrible condition for women ready for marriage. She blamed the problem partly on the Nigerian economy, confusion among the bachelors on their choices of the women they want as wives and the attitudes of the spinsters.

“Many women, whether consciously or not, behave irritably sometimes, forgetting that the man just beside them at every point in time may just have been nursing how to start a conversation that could lead to marriage. Some other ladies are very choosy and unserious at their early stages of adulthood. They only open their eyes to discover that their friends are all married and that they are the only ones left at the bus stop. Then it becomes a terrible case for them,” she explained.

With the above examples, do you sincerely think that there is scarcity of men for ladied in Nigeria?…..kindly share your opinion with us below

One thought on “Nigerian Ladies cry out over scarcity of men to marry them.”