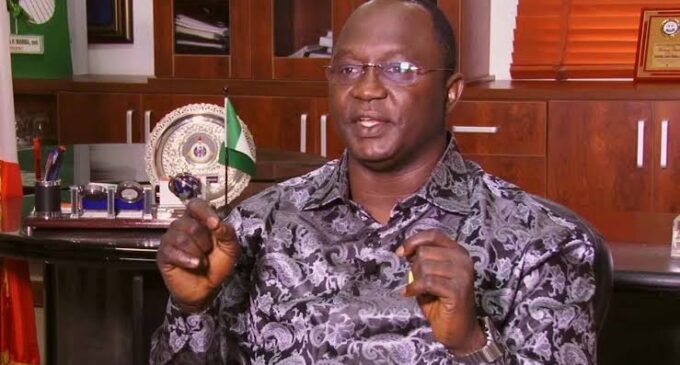 The trio of Federal Government, Nigeria Labour Congress and Trade Union Congress have failed to reach a consensus on recently hiked petrol price and electricity tariffs after a marathon 8-hour meeting Tuesday.

The Federal Government’s plea for understanding, emphasising that fuel subsidy is not sustainable considering the crash in the nation’s revenue by 65% fell wholly on deaf ears as organised labour insisted on reversal of the hikes.

Although the government team made presentations on its policies, it didn’t specify how the effects of the hikes in electricity and petroleum products would be alleviated.

Hi, What Are You Looking For?

ByAynaijang NewsPublished2 days ago
The trio of Federal Government, Nigeria Labour Congress and Trade Union Congress have failed to reach a consensus on recently hiked petrol price and electricity tariffs after a marathon 8-hour meeting Tuesday.

The Federal Government’s plea for understanding, emphasising that fuel subsidy is not sustainable considering the crash in the nation’s revenue by 65% fell wholly on deaf ears as organised labour insisted on reversal of the hikes.

Although the government team made presentations on its policies, it didn’t specify how the effects of the hikes in electricity and petroleum products would be alleviated.

Also on Tuesday, the TUC has said the indefinite strike and nationwide protest billed to commence from Wednesday, September 23, would hold as planned.

The congress had issued a seven-day ultimatum to the government on Monday, threatening to embark on an indefinite strike if the Federal Government failed to revert to the old electricity tariff and the price of petrol.

Quadri Olaleye, the TUC President, was quoted by The PUNCh as saying on Tuesday that, “The ultimatum still stands; no acceptable explanation was presented. Still in the meeting.”

The dialogue which held at the Banquet Hall of the Presidential Villa, Abuja, began around 11 am and dragged on till past 7 pm without a resolution on the issues raised by the organized labour.

The parties, however, agreed that the unions should go for consultations with their executive council members and return for the second leg of the meeting at a future date.

The labour unions are expected to hold an expanded meeting today (Wednesday), where they would take a final position on the issues raised at the dialogue and revert back to the government.

In his welcome address, Ngige said there was an urgent need for all stakeholders in the country to join hands to fashion out “how we can survive the economic challenges imposed by the COVID-19 pandemic.”

He said the meeting was “a bilateral dialogue between us as Nigerians to consider the state of the economy and events that have necessitated recent increases in electricity tariff and the price of Premium Motor Spirit.”

But Wabba argued that the high prices of petroleum products and electricity tariff had erased the gains of the minimum wage.

He faulted the government for unilaterally fixing the prices of electricity and petrol without consultations with Nigerians.

According to him, many Nigerians are struggling to survive because of the high cost of living occasioned by the government’s recent policies which included the increase in the Value Added Tax.

Wabba stated, “The question now is what do you have on the table to actually cushion the effect on workers and their families because they have been pushed to the wall. They are already enraged.

“Do you have anything for us so that we can say yes, despite this challenges, this is what I have for Nigerian workers so that they can have something that can cushion this effect for them?
“Already, the value of the minimum wage has been eroded; that is the reality. If Ghana compares their minimum wage with our own, you will see their minimum wage.”

He accused the government of transferring the “inefficiency in the subsidy regime” to the consumers which they (consumers) have to pay through the hike in price.

The NLC president admonished the government to fix the nation’s refineries and stop lining the pockets of fuel through a fraudulent subsidy regime.

“More than 90 countries of the world actually have minimum wage on this. Those are the issues that are biting very hard and workers and citizens are crying aloud that there is much burden on them.

“Therefore let us also look for solutions. How do we mitigate this impact which is very pronounced on workers?”

On his part, the TUC president asked the government to reverse the recent price hikes, which he said, had been biting Nigerians hard.

“Unfortunately, now they are crying. By calculation, we are losing an additional 15 per cent of what we gained as a result of the signing minimum wage. For somebody who is paid N6,666 as increment, now he is losing not less than N25, 000 from his income. The N6, 666 is going, additional N15, 000 is added.”

READ ALSO:  Trouble Looms As APC, ADC Supporters Clash In Ondo Ahead Of Election, 15 Vehicles (Photos)
Sylva in his presentations stated that the FG had yet to begin the full deregulation of the downstream sector “because of the desire of President Buhari not to inflict more pains on the masses.”

The minister emphasized that the landing cost of petrol is N163 but it was being sold for N161 per litre, indicating that full deregulation was yet to take off in the country.

He said going by the current exchange rate, the products could have been sold at N183 per litre.

He added that the country was in a bad shape because of the crash of crude oil globally.

“We have not fully deregulated because of the concerns the government has for Nigerians. Price of fuel could go up to N183 per litre going by the current rate of the dollar. We need to open up the economy, even though, the initial stage may bring pains to Nigerians,” he stated.

The Federal Government two weeks ago increased the ex-depot price of petrol from N 138.62 to N147.67, prompting marketers to adjust their petrol prices to between N158 and N162 from N148 to N150 in August. The ex-depot price is the price at which government sells petrol to marketer