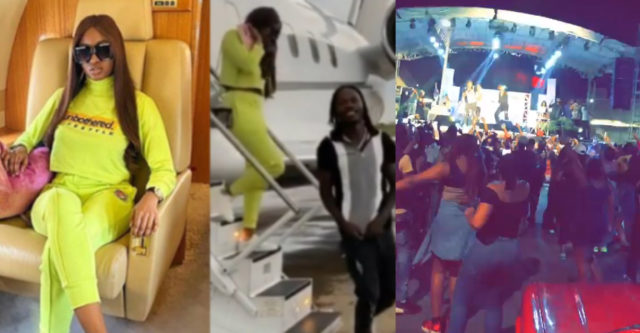 Nigerian musician Naira Marley has come under fire for holding a concert in Abuja on Saturday amid the coronavirus restrictions.

The concert which held at Silverbird Entertainment Center in Abuja was meant to be a drive-in concert but videos surfaced on social media showing a packed crowd with disregard to the social distancing rule.

It was gathered that Naira Marley, along with the show host Ex-BBNaija star Kim Oprah, flew from Lagos to Abuja for the concert thereby flouting the ban on interstate movement and flights which may not be lifted till June 21 according to Sani Aliyu, the National Coordinator of the Presidential Task Force on COVID-19.

This is coming weeks after Naira Marley was arrested and charged before Lagos State Magistrates’ Court in Ogba over non-adherence to the COVID-19 order alongside former governorship aspirant in Lagos State, Babatunde Gbadamosi when the duo were guests at a party hosted by Nollywood actress, Funke Akindele and her husband, Abdul Rasheed Bello, better known as JJC Skillz.

Naira Marley was later released after tendering a written apology to the Lagos State Government and an undertaking that he would henceforth comply with the government’s stay-at-home and social distancing directives; and that he would go into 14-day self-isolation, having attended a crowded birthday party.

Some Nigerians have taken to social media to express their displeasure at the singer:

Dr. Dípò Awójídé (@OgbeniDipo):
Why should Naira Marley (who seem to like so much walaha) be arrested again when we watched on TV how several government officials who work with the president flout the lockdown rules and nothing happened to them? The Aisha Buhari issue is also about an SA flying around.

SECRETARY ACE™ (@SecretaryAce):
The number of people at the concert Naira Marley performed in shows that a lot of people don’t believe Coronavirus is in Nigeria. Both the federal government and NCDC have not done enough to prove otherwise.

AyeMojubar (@ayemojubar):
Naira Marley did it first with Funke Akindele. Sincere there was no stringent punishment for that I know he’ll repeat it, and voilà he did it again in Abuja overnight. Lawless citizens, lawless govt, lawless nation.

Dehkunle of Africa assistant (@DehkunleA):
Naira Marley just proved to us we don’t have any governing system in Nigeria