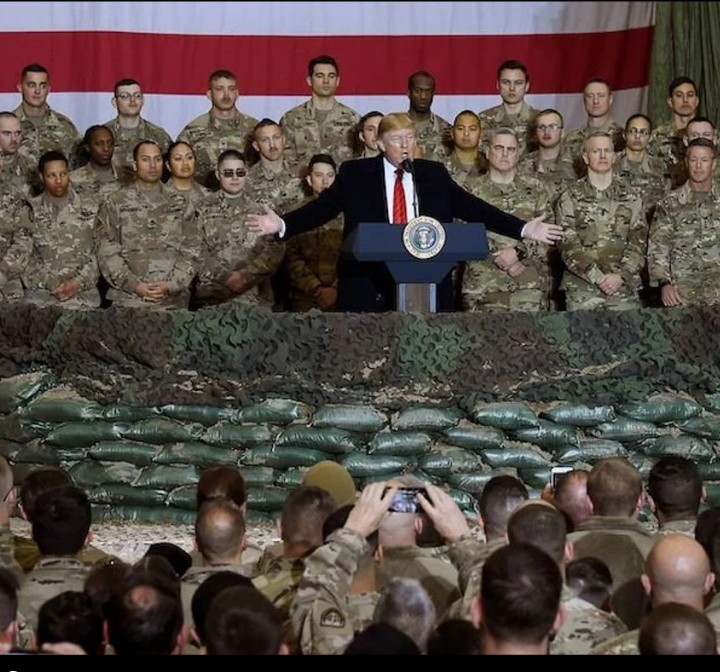 The poll, conducted earlier in August before either political party held its convention, appears to contradict the president’s frequent boasts that members of the military favor him because of defense budget increases, his alleged tough stance on international terrorist organizations and his promises to decrease the presence of U.S. troops overseas.

Military Times polling has in fact shown a steady decline in active-duty troops’ opinion of their commander in chief over the course of his term. The latest round — a survey of more than 1,000 troops — found that 49.9% hold an unfavorable view of the president, and 42% said they “strongly” disapprove of Trump’s time in office. About 38% of respondents say they hold a favorable view of Trump. (The poll had a 2% margin of error.)

A May 2016 Military Times survey of active-duty troops showed Trump beating Democratic opponent Hillary Clinton by better than a 2-to-1 margin.

But Trump’s latest poor favorability rating further extends a trend across his term: In a Military Times poll from late 2019, Trump’s “favorable” rating was about 42%. That was down from the start of his term, when the president rated 46% favorable and 37% unfavorable.

By comparison, a national Gallup Poll carried out before the political conventions found that 55% of all Americans held a negative view of the president, against 42% who viewed him positively.

A number of factors could explain the negative trend. Trump was recently reported to have ignored intelligence that Russian intelligence had placed bounties on American troops in Afghanistan. He has consistently depicted troop-deployment issues as a matter of balancing the financial ledger, complaining that long-time NATO allies don’t pay enough and expressing frustration at the funds the U.S. puts towards maintaining a military presence in South Korea.

It’s fair to say that Trump is not as popular as Republican nominees have been in the past among this group,” Peter Feaver, an adviser to former President George W. Bush who now teaches political science at Duke University, told Military Times. “The bottom line is that in 2020, Trump can’t be claiming to have overwhelming support in the military.”

The poll surveyed troops from a specific audience: Military Times subscriber lists and other publication databases, which is the same base that the poll has sampled for the past four years. The average respondent was 39 years old.

That could be significant, in that military officers and enlisted members demonstrate sizable differences in opinion, with enlisted personnel routinely holding a more positive view of Trump over the last four years. More than 59% of officers hold an unfavorable view of the president, with more than half registering “strong” disapproval, while 47% of enlisted members have an unfavorable view, with 39% approving.

Rosalinda Maury, director of applied research at Institutes for Veterans and Military Families, which partnered with Military Times in conducting the poll, said that the results are “a good sample of the career-oriented military members’ views,” which historically have differed somewhat from the opinions of junior enlisted troops.

“But the president claims he has been good for the military, that they’re grateful that he has rescued them from the shambles,” Maury added. “This shows that’s not the case with all of the military.