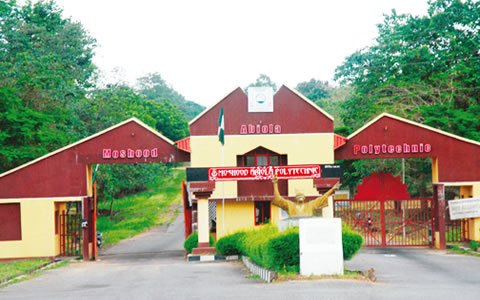 Students of the Moshood Abiola Polytechnic (MAPOLY), Abeokuta, Ogun State on Monday protested at the school’s entrance owing to an alleged hike in their fees.

Naija News learnt that the state wing of the National Association of Nigerian Students (NANS) is in support of the protest over alleged increment in fees for both the fresh and returning students of the institution. The students who were seen carrying placards to air their grievances said the move was against the institution’s original intent to only increase fees of fresh students.

In a statement signed by the Chairman and Public Relations Officer of NANS, Ogun Joint Campus Committee, Damilola Kehinde and Olufemi Owoeye, a breakdown of the fee increase were listed. NANS gave a breakdown of the increments as acceptance Fee (science students) N25,500 increased to N35,500; ND N55,000 and HND N51,000 increased to N62,000 and N58,000 respectively. Fresh students (non-science students) ND N51,000 and HND N46,000 increased to N58,000 and N53,000 respectively. Returning students (science) N46,000 for both ND and HND increased to N53,000, and Returning students (non-science) N41,000 for both ND and HND increased to N48,000. NANS stated that “we are disheartened to converge here today, not for celebration but to decry the suffering and panic the management of MAPOLY has subjected us to as students. “Our offence as Nigerian students is that we want to be educated and the Dr Adeoye Odedeji-led management of MAPOLY is saying education is not for the poor. “A few months ago, in the last academic session, tuition fees for both the National Diploma and the Higher National Diploma students were increased, including part-time students, whose figure was not accurately given. We resisted this increment and came to a benchmark of reduction in the initially added amount after due consultation. “The clear promise made to the student body by Dr Odedeji and other members of the management team was that there would no longer be increments. At least, not in his own time as the acting Rector. Little did we know that he was only waiting for the state government to confirm his appointment as substantive Rector before unveiling his policy to make MAPOLY unaffordable for the masses. “Without considering the economic conditions of parents and guardians, tuition fees increased outrageously again for two consecutive sessions. “This is the highest level of discomfort any management could think of putting the students through.”