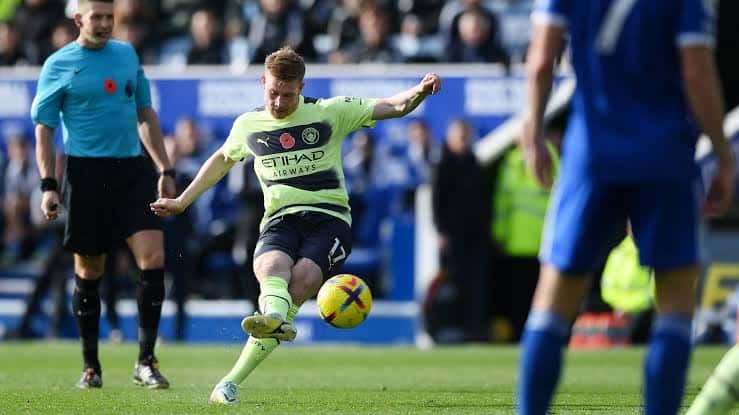 Manchester City defeated stubborn Leicester City at the Kingspower Stadium with a goal to nil.

Leicester City’s were undone by a Kevin de Bruyne’s outstanding free-kick after English forward, Jack Grealish was fouled.  Prior to De Bruyne’s spectacular rocket into the top corner from 25 yards four minutes into the second half, Brendan Rodgers’ men are clearly in a relegation scrap.  Even without Norwegian forward, Erling Haaland, who was dealing with a fever and a foot ailment, the Belgian’s goal broke down the foxes as a reward for City’s dominance.  For Guardiola’s team, it was their first away goal in four games, demonstrating that they can still prevail even without Haaland who was replaced by Julian Alvarez.  Youri Tielemans’ effort from a corner was deflected into the crossbar by Manchester City goalkeeper Ederson, but ultimately Leicester lacked the attacking ambition and talent to put Pep Guardiola’s team to the test. With a win over Nottingham Forest on Sunday at Emirates Stadium, Arsenal may reclaim the top spot, but for the time being, Manchester City is back on top.

One thought on “Man City Knock Leicester Down With No Haaland”