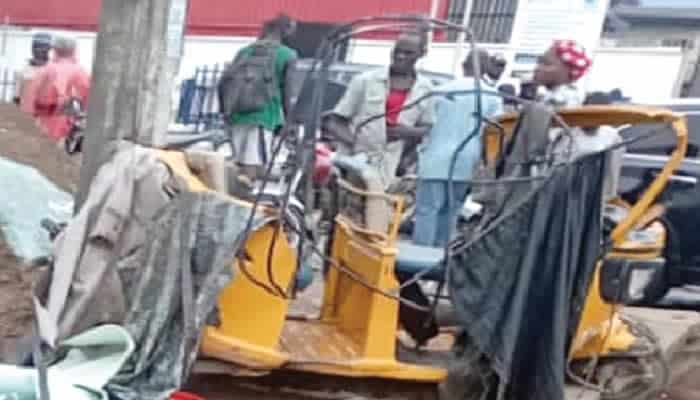 A female driver has reportedly crushed three passengers including a pregnant woman and a girl to death on Iju-Ishaga Road in the Agege area of Lagos State.

The dire incident was said to have occured on Saturday around 4pm. The woman who was reportedly speeding, hit a tricycle conveying the passengers inward Agege. According to Punch, the passengers had allegedly lost their lives while the driver who sustained injuiries was rushed to a hospital. An eyewitness identified as Mayokun Oluwadara told the aforementioned publication that people were shouting at the woman to slow down before the accident happened. He said, “A woman was driving a private car at top speed. People were shouting at her to slow down. The area is usually clumsy with people and traffic. Unfortunately, that road was clear that day and the woman saw it as an opportunity to race through. She hit the tricycle from behind. “People were very particular about the pregnant woman and the small girl because of the pregnancy and the girl’s age. They were evacuated immediately. Some people said the pregnant woman and the girl might still be breathing. But they were dead because some of us saw that they were not moving at all.” The suspect, realizing what she had done sped off from the accident scene. Residents were said to have alerted park operators in the area to stop the car and she was intercepted at the Agege Under bridge after which she was handed over to the police. The state Police Public Relations Officer, Benjamin Hundeyin, who confirmed the incident, however, said the police were only aware of one passenger who died on the spot.