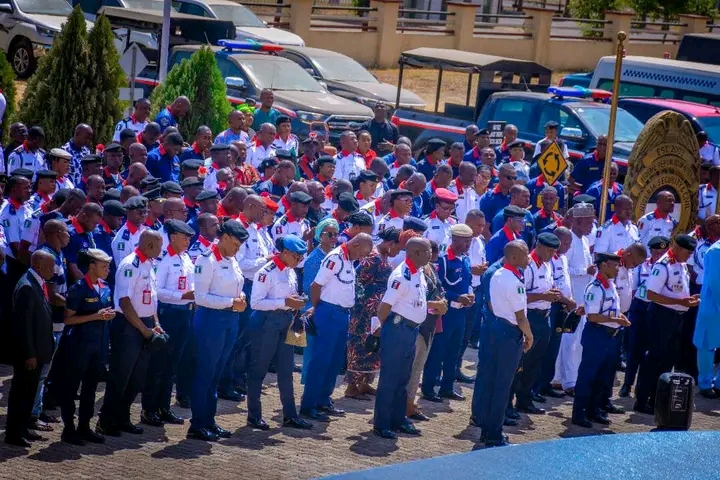 The Commandant General (CG), of Nigeria Security and Civil Defence Corps (NSCDC), Dr . Ahmed Abubakar Audi, mni, OFR, has expressed grief on the demise of seven personnel of the Corps ambushed and killed in Kaduna by bandits while on official duty.

He called on personnel not to be deterred but to remain resolute, committed, and resilient in their pursuit of peace, safety, and security for themselves and the country at large.

Dr . Audi made this call during a Special Intercessoorganized organized at the NSCDC National Headquarters, Abuja, to raise a common voice to God for the protection of all because of the gruesome murder of seven personnel by bandits at Birnin-Gwari, Kaduna State, and four others who died in a ghastly road crash in Abuja simultaneously on Monday, January 9, 2023.

Represented by the DCG Crisis and Disaster Management, Dr. Nnamdi Nwinyi, the CG stressed that the Corps is doing right by securing the country and would not be deterred or overwhelmed by the unfortunate incidents.

He condemned the killings and decried other news of deaths of personnel across the nation, which informed his disorganized organize the intercessory prayers.

Led by the Chief Imam, Deputy Commandant Muha, named Aliyu, and National Chaplain, Assistant Commandant John Paul at the Corps Headquarters, both clergymen offered prayers for all personnel, families of the slain, operatives, and repose of souls of those who have died. were prayers were also offered for the stoppage of such ugly incidents in the future, the Peace and Progress of Nigeria, and the Successful conduct of the 2023 General elections.

The CG called on personnel to continue performing their patriotic duties and stressed the need for more security consciousness and vigilance in the course of these assignments.

In the same vein, the Corps helmsman directed the Assistant Commandant General (ACG), Zone B, Kaduna, Mohammed Haruna, to lead a delegation of very senior officers to commiserate with families of the deceased in Kaduna State.

The ACG Zone B, while on the condolence visit on behalf of the CG, assured them of the Commandant General’s suppotimest at all times and promised to ena sure that a proper and befitting burial is given to them all.

The National Pthe resident, Association of Licensed Private Security Practitioners of Nigeria (ALPSPN), Chris Adigwu, who also joined the Corps in the prayer session on behalf of his asssympathizedympathised with the CG, Corps, management, and the entire officers and men of the Corps on the sad incidents.

He prayed for God to prevent a repeat of such calamities on the Corps and encouraged the personnel to be of good courage and not give up or relent in their pursuit of the Corps mandates.