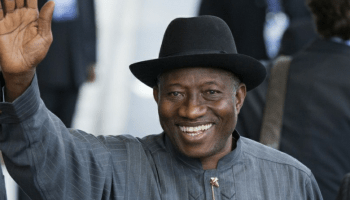 AHEAD of the 2023 general Election, Former president, Goodluck Ebele Jonathan has sued for peace, unity among Nigerians.

Speaking during a private visit to the governor of the Nasarawa state in government House Lafia, Jonathan described the moment leading to the 2023 general election as challenging, especially whenever the atmosphere are warm and charged.

The former president commended the Nasarawa State Governor, Abdullahi Sule, on his development strides, urging the Governor to keep up with the good work going on in the state.

“The last time I was in Lafia was 2015, during the presidential election. Since then I have not had the opportunity to come. With what I have seen, you are doing very well and you have to keep up, the tempo” former president stated

Jonathan said he was particularly pleased with Governor Sule because of the number of female appointees in his cabinet, recalling that as president of the country, he always insisted that government must encourage the female gender, as well as the youths.

“I am also pleased with the Governor because I have seen a number of female faces here. You know, when I was in office, I always insist government must encourage the female gender and also youths. I am quite happy that even the spokesperson is also a lady. I want to thank you for what you are doing,” he added. According to former president Jonathan, Nasarawa and Bayelsa have something in common, they were created in the same year, recalling the peculiarities the two states shared when he was in office as president.

“I believe that friendship will continue to grow from strength to strength. I thank all of you for coming here to welcome me personally in my personal capacity as Goodluck Jonathan. That shows the love you have for me and I believe I should have the opportunity to reciprocate,” he said.

The former president expressed delight with the reception accorded him, with the members of the Nasarawa State executive council at hand to welcome him. Jonathan however said his visit was personal and private.

“Let me sincerely thank the Governor and the government of Nasarawa State for giving me this reception. Because I told the Governor I was coming as a private visitor. We had some conversations with him on some personal, private issues. And I am surprised that the whole executive council gathered to give me this warm reception as if I am still sitting as a president of the country,” Jonathan stated.

“I didn’t even know that you have completed the airport in Nasarawa. If I had known there was an airport, I would have asked a friend to drop me off. I wouldn’t have stayed on the road for almost three hours. I have to thank you for what you are doing. Continue to do that for the people,”

Responding, Nasarawa State Governor, Abdullahi Sule, thanked the former president for keeping interested in the state, which he said, will be mutually beneficial.

Governor Sule particularly appreciated Goodluck Jonathan for his role in sustaining democracy in the country, stressing that, without Jonathan, the country’s democracy may have been truncated in 2015.

“The whole country has a love for you because, without you, the democracy that we had in 2015 and practicing today wouldn’t have been possible,” he stated.

The Governor further appreciated the former president for the role he has continued to play within and outside the country sustaining peace.

“I thank you sincerely, Sir. I continue to thank you for the good work that you continue to do for this country and the world for peace not only in Africa but the world. may God continue to give you long life, and good health so that you do whatever it is for the nation,” the Governor said.

The highlight of the visit was the courtesy call on the Emir of Lafia, HRH, Justice Sidi Bage Muhammad (rtd).