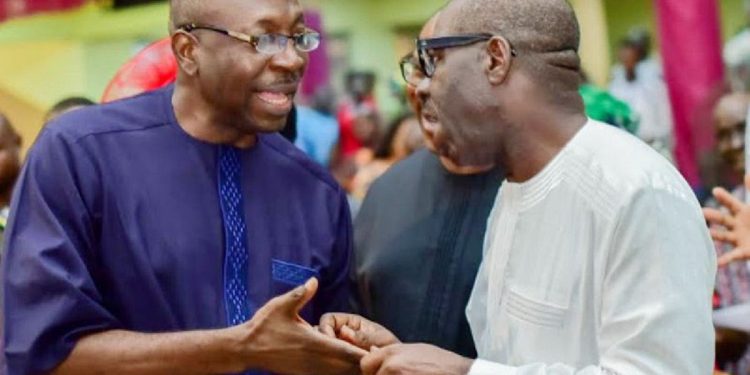 The governorship candidate of the All Progressives Congress (APC) for the Edo State September 19 gubernatorial election, Pastor Osagie Ize-Iyamu, has suggested that it a ‘shame’ for the People’s Democratic Party’s (PDP) to field Governor Godwin Obaseki as its candidate, having previously condemned and sued the governor.

In a statement released by Mr John Mayaki, the Director of Communication and Media, Ize-Iyamu Campaign Organization, the APC candidate for governor said it was confusing that ‘today, the PDP is singing Godwin Obaseki’s praise, claiming he is the almighty, the saint, the blameless after parading him as a failure who deceived the courts and INEC with counterfeit credentials.

‘The same PDP dragged Obaseki before a judge, pointing out the inconsistencies in his academic records, seeking judicial order to stop him from assessing the government corridors.

‘Today, the PDP says Obaseki has initiated programmes and policies in Edo State when only a few weeks ago before their tax collectors were settled, the party branded the embattled Governor a complete failure who reversed the growth and development of Edo State.

‘The naked truth is that the PDP has neither plan nor strategy for winning this election or to lead Edo State. They, therefore, resort to the only one thing that works for failures: excuses and mudslinging.

‘It is a shame that this party that brought out Aliko Dangote from his trademark political non-alignment and characteristic silence still has the audacity to make national statements that still border on falsehood and deception,’ it added.