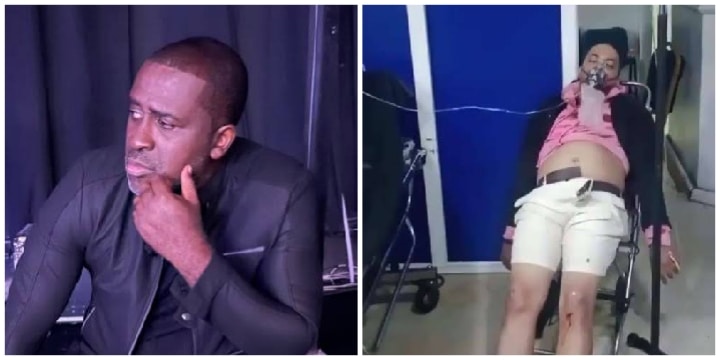 Media personality and TV host, Frank Edoho has weighed in on the viral video of former BBNaija housemate, Rico Swavey in the hospital while on life support.

Naija News recalls that Rico passed away on Thursday morning, days after he was involved in a ghastly accident in Lagos. In the video making the rounds online, Rico can be seen sitting on a chair while receiving oxygen as the nurses seemed confused and contemplating how to move him into the Intensive Care Unit at the hospital. Some Nigerians have expressed anger as they call out the healthcare attendants for laughing and making videos of the reality TV star before his death. Reacting to the viral video, Edoho insisted that the medical personnel involved should be banned from the medical field and if possible, also arrested. Speaking further, he wondered how one could expect capable medical practitioners from a country whose leaders seek medical help from hospitals outside the country. He wrote, “Those idiotic medical personnel that were filming and laughing while Rico laid there dying should be banned from medical work and possibly arrested. “Why would we expect decent healthcare in Nigeria when our leaders always scurry abroad to get state-of-the-art medical attention?”