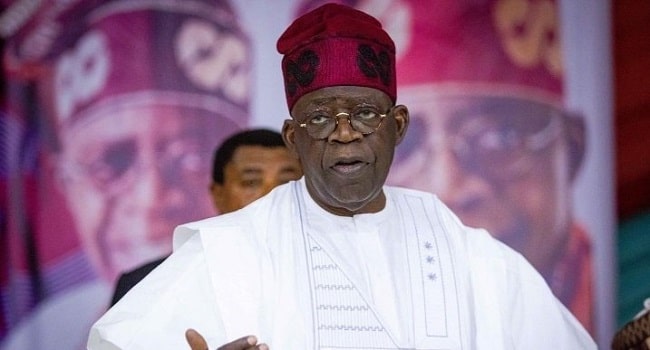 The presidential candidate of the All Progressives Congress (APC), Bola Tinubu, has promised to deal decisively with terrorists and bandits threatening national security if elected President in 2023.

Speaking on Monday in Kaduna during an interactive session with the Arewa Joint Committee, Tinubu stated that every part of the country will be protected if elected as the next Nigerian leader. The APC Presidential candidate promised to equip the Nigerian military and inject much-needed trained personnel to strengthen the heroic efforts of the troops fighting terrorists and bandits. The former Governor of Lagos State also pointed out that he would pay attention to modern fiscal drivers to realise the change he envisioned for the country. He said:  “Under my leadership, the Nigerian military will receive a much-needed injection of trained personnel to strengthen the heroic efforts of the troops that are currently in service. We will deal decisively with all elements threatening our peace, security and unity. “I guarantee you, we will end kidnapping and banditry, not only through increasing our policing footprint and capacity but also through other soft approaches that would promote inclusion and boost the economy of our local communities. I assure you, under my leadership, every inch of our national territory will be secured and defended.”

Tinubu acknowledged that as a result of concerns for the safety of the people, there had been increasing calls for states to be allowed to establish their own police forces. He said, “The issue of state police, just like the larger debate around restructuring, is a constitutional matter that requires consensus-building. “Though restructuring meant different things to different people, it should be noted that my aspiration to lead this country is a testimonial for my strong belief in its unity and indivisibility. “These were matters that required consultation with critical stakeholders, including the Council of State, the legislature, the judiciary, state governments, traditional institutions, and groups. “We will sustain ongoing efforts of increasing the boots on the ground commensurate to our geography and population.“