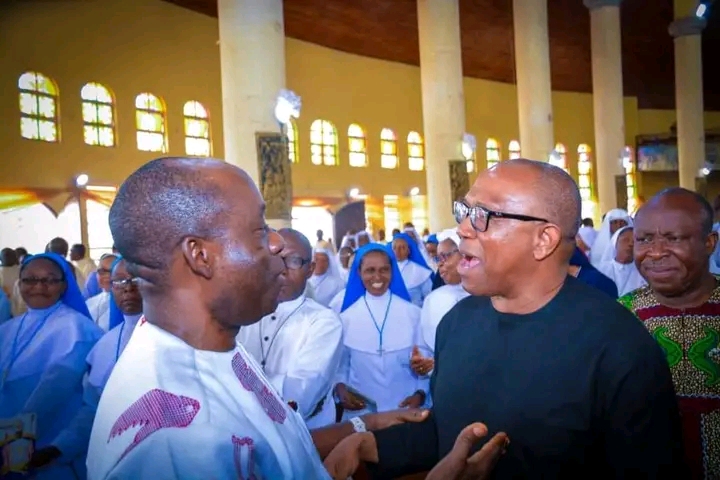 Anambra state government has stated that contrary to reports, campaign billboards of political parties including that of Peter Obi were removed for failing to abide by the guideline approved by the state.
This was disclosed by the governor, Charles Soludo, through his chief press secretary Christian Aburime.
According to Soludo, the billboards were dismantled by the Anambra Signage and Advertisement Agency (ANSAA).

Governor Charles Soludo of Anambra State, however, debunked ordering anybody to destroy or dismantle billboards belonging to the Labour Party or any of its candidates for the forthcoming general elections.

Consequently, the governor described the report making the rounds that he gave such order as misleading.
Charles Soludo said that the campaign billboards of Peter Obi and other candidates were removed for being against the guidelines of the Anambra signage agency.

Meanwhile in a statement by his Chief Press Secretary, Christian Aburime, on Sunday, January 15, said it was the Anambra Signage and Advertisement Agency (ANSAA) dismantled billboards of political parties that went against their guidelines.

“In August 2022, Anambra Signage and Advertisement Agency, sent out letters to all the political parties in the state to obtain political campaign permits as provided by law, which would enable them to enjoy campaigns around the state and access to rent available government outdoor media assets and public spaces.
“Also, in October 2022, the agency, again, sent out another letter to the candidates reminding them of the need to obtain the permit. Before commencing enforcement in November 2022, ANSAA ran one-week sensitisation adverts in the media to further remind political parties and their candidates. Many of the political parties and candidates responded, including APGA candidates.

“It is only fair that all politicians and political parties should be treated equally. The Labour Party cannot choose to be lawless in a society governed by laws and regulations, whereas other parties and candidates comply with directives of the signage agency, except Labour Party.”

Also reacting, the Managing Director of the Anambra Signage and Advertisement Agency (ANSAA), Mr Tony Ujubuonu, said the agency removed Peter Obi’s billboards, because, the time given for political parties to pay necessary fees for their campaign billboards and posters on government assets had elapsed.
His words: “If they say they pay the campaign fees, let them give me the evidence. I should know who paid because I’m the ANSAA MD.”

Meanwhile, the senatorial candidate of the LP for Anambra Central, Senator Victor Umeh, has threatened to sue the Anambra State government and insisted that Soludo and his government had no power under any extant law to regulate electoral processes. He argued that it is the sole responsibility of the Independent National Electoral Commission (INEC) to do so.

He said: ”There is nothing like campaign fees under the electoral law. No state government has a right to impose any fee on any candidate before he could campaign. There is no such law in Nigeria and no such law either in Anambra state passed by the State House of Assembly.

“If Soludo makes an executive order of humongous fees of N10m, N7m, etc before one could campaign in the state, that’s against democracy. You can’t prevent somebody from campaigning with arbitrary fees. I was Soludo’s campaign DG when he campaigned and became governor in 2021. How much did he pay for his campaigns?”

Umeh added that he had paid N4 milion to his advertising agencies for billboards, who accordingly, paid the ANSAA the required fees for outdoor adverts.
He said: “You can’t tax a candidate of a political party to pay a state government before he can campaign. No other state does that except Soludo’s government. Who did Soludo pay campaign fees to in 2021 when he contested for governorship?

“I have told the advertising agent to write to the state government to restore the billboard because it was a contract signed with them and I paid them fully, and they paid ANSAA. Why should Peter Obi pay N10m to Soludo before he could campaign in Anambra state, and why should Umeh pay N7m? What Soludo is doing is illegal. The campaign is an open and free thing to solicit for a vote.”
Recall that both Social and mainstream media went agog lately with reports that billboards of the presidential candidate of the Labour Party (LP), Peter Obi, and that of the party’s senatorial candidate for Anambra Central, Senator Victor Umeh, mounted on the pedestrian flyover, along the popular UNIZIK junction in Awka, was pulled down by Soludo’s government; a development which Senator Umeh described as unconstitutional, and threatened to sue the state government if the posters were not restored anytime soon.

The reports also had it that the Anambra Signage and Advertising Agency (ANSAA), also set machinery in motion to remove all the LP billboards mounted in other major cities and towns in Anambra state, and replace them with those of All Progressives Grand Alliance (APGA) candidates.
It was further reported that the state government also ordered the removal of the Labour Party advert at the Afor Nnobi gantry; an advert which was reportedly mounted since October 2022, and was paid for five months.
Reports from around the town also had it that Governor Soludo said he did not want Labour Party advert at such strategic places, ordered the Signage Agency in the state to refund the money it received for the advert, and further ordered the removal of all Obidient billboards across the state.
(Legit Ng).