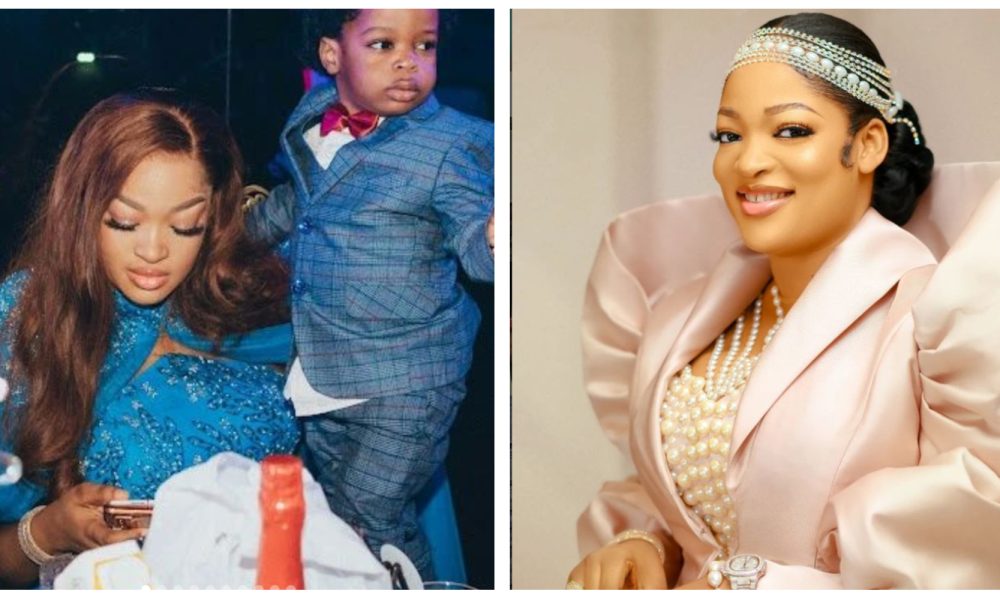 While the Ooni of Ife, Oba Adeyeye Enitan Ogunwusi, is still basking in the euphoria of his new marriage, his estranged wife, Naomi Silekunola has shared rare photos of hers and their son, Tadenikawo.

Naija News reports that Naomi left many of her fans and followers gushing over her beauty when she shared their photos from a recent event. Recall that Silekunola and the traditional Yoruba monarch welcomed their son, Tade in November 2020 before their union crashed in December 2021. The prophetess captioned the photos: “Over the weekend we celebrated maami @55 and here are few pictures from the beautiful event videos coming soon. Spot my prince charming in his blue tuxedo”

The photos sparked reactions from fans as they gushed over her and her son. ceolumineeofficial wrote: A Woman Of lncomparable Character! I Love you till Eternity holubukky_04 wrote: “My beautiful zero worries queen weda u are in d palace or not y remains our Queen for life love u susu” kaffy76 wrote: “You are specially and uniquely made. Bless you my queen” ayinkeolowosibi wrote: “Beautiful in all prince looks charming” bola.akin wrote: “Prince Tadenikawo is too cute. Handsome Prince” esther_modella wrote: “This woman is very pretty, her son looks so much like his father” bayunique_makeovers wrote: “I don’t have beef with any of the ooni’s queen, but to be sincere, Naomi is still the prettiest of them all, but the one i admire the most among them is queen Zainab Otiti” goldenmeema wrote: “My only problem is she’s too beautiful. The most beautiful Queen in and out, God’s special handmade” bukkie_martinz wrote: “Wow our Queen so beautiful..Oba lola prince Tadenikawo” ayinkejt wrote: “My beautiful queen and handsome prince”