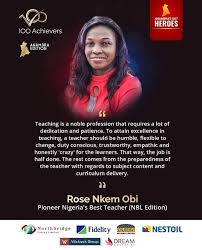 The Anambra 100 Achievers team has joined all people of goodwill in celebrating teachers all over the world as they mark their day today.

In a Press Statement made available to newsmen, they described teachers as the biggest contributors to civilization, affirming that the world would have been in a state of“tabular rasa” in the absence of the teaching career.

Speaking further, the group stated that the future of the world remains in the teacher’s classroom, and emphasised that a nation is as great as its teachers “Presidents of countries of the world both past and present learnt from classroom and several future presidents are learning in the classroom today; so are all the great men and women in our society”.

Continuing, they stated that it was as a result of the high regard they have for the teaching profession, that 100 Achievers’ project accommodated a lot of teachers at various strata with a view to showcasing their sacrifice and efforts, particularly in the case of Mrs. Rose Nkem Obi who became the pioneer Best Teacher, Nigerian Breweries edition , in 2015 beating about 25,000 other teachers across the country.

Concluding, the team noted that “teaching is the greatest act of philanthropy and optimism…..a teacher affects eternity; he can never tell where his influence stops. Teachers are the most important members of the society because of the kind of the sacrificial work they do, which has very great impact on the society”.