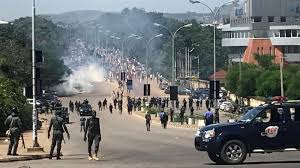 This comes four days after Mohammed Adamu, the Inspector General of Police, warned against the use of force.

“The universal right to freedom of speech, assembly, and movement must always be respected and secured by the police,” the IGP said.

Some protestors bearing the Nigerian flag were targeted by police operatives.

The police attack took place at at least two places in the capital of the nation and in Nyanya.