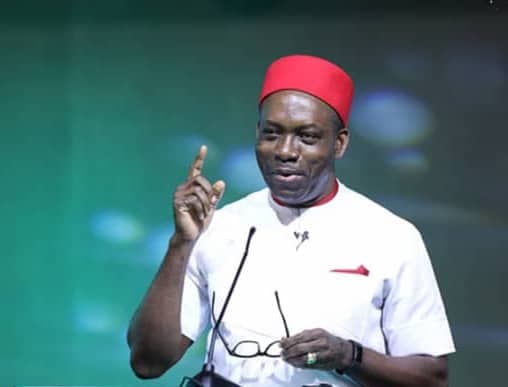 The Governor of Anambra State, Prof Charles Soludo on Tuesday averted what could have become a monumental protest by traders in the State over what they described as oppression and harassment of their leaders.

The traders in their respective markets were said to have started mobilizing for protest to Awka on Wednesday to register their displeasure over government action against their leaders until the timely intervention by the Governor.

Recall that the leaders of the traders were invited to a meeting by Anambra State Internal Revenue Service AIRS, with the Ministry of Commerce and Industry on Tuesday, November 7, 2022, through a letter signed by the Chairman of AIRS, Richard Nwora Madiebo, at the Training Hall of Revenue House Awka, to discuss on the operational procedures for the collection of loading and offloading of Heavy Duty Trucks Fees in the various markets in the state.

However unknown to the leaders of the market, men of the Department of State Services, DSS, were also invited to the meeting.

As the meeting was ongoing, two market leaders from Building Material International Markets Ogidi and Aluminium and Allied Products Dealers Oguta Road Onitsha were said to have given on the way to go about the collection of loading and offloading fees from the vehicles, to benefit both the government and the traders, to avoid a crisis that may lead to breaking down of law and order.

Shortly after their comments, the DSS officials were said to have pointed at them, ordering them to follow them to their office, the unsuspecting market leaders followed them and they were driven to the DSS office where they discovered that they were invited for questioning by DSS.

Following the incident the meeting ended abruptly as other market leaders present at the meeting stormed out of the Training Hall, Revenue House Awka venue of the meeting for the DSS office at Amawobia, Awka, to protest against the arrest of their colleagues, they felt gave a genuine and sincere suggestion that will ensure crisis free toll collection on heavy- vehicles in their markets.

As the news of the arrested of the two market leaders got to their markets and the lawyers of the market leaders and the market unions, the traders in the respective market sets started mobilizing for protest to Awka on Wednesday to register their displeasure over government action against their leaders.