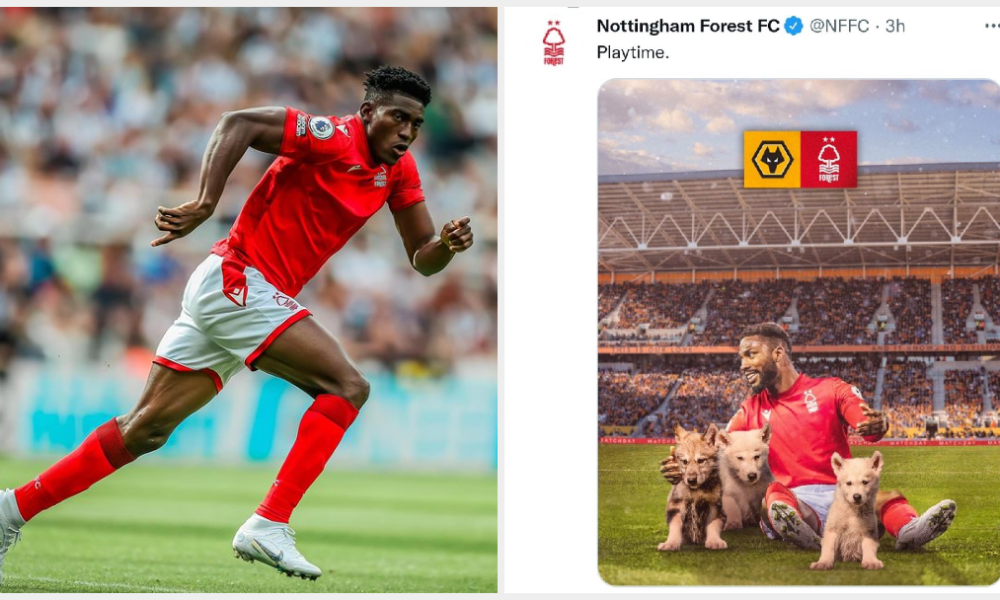 Super Eagles players, Taiwo Awoniyi and Emmanuel Dennis were both in action in Nottingham forest’s 1-0 defeat to Wolverhampton Wanderers.

Steve Cooper’s team have now gone seven games in a row without a victory, losing six and a draw In Forest’s Premier League match against Wolves, Dennis played till he was replaced in the 70th minute, and then Awoniyi came in just 6 minutes to the end of the game. Naija News recall that Dennis scored his first goal for his team, which sparked a lot of reactions from the fans. In the days leading up to their 1-0 loss, Forest’s official Twitter account tweeted a photo of Dennis sitting on the City Ground field with three wolf cubs sitting calmly next to him, with the caption ‘Playtime.’

Wolves have lost their last three games, so this was a return to winning ways for them. In order to lift Wolves out of the relegation zone and send Forest to the bottom of the Premier League, Ruben Neves went on to score the game’s lone goal from the penalty spot. Then, Wolves posted with a caption “Playtime’s over,” along with a picture of an axe stuck in a tree trunk. Forest were awarded a penalty of their own after referee Thomas Bramall visited the Referee Review Area, for a foul on Ryan Yates by Matheus Nunes. But, Jose Sa saved Brennan Johnson’s penalty low to his left to keep Wolves 1-0 ahead. With 10 Premier League games completed, Steve Cooper’s team is currently grounded to the bottom of the standings with five points.