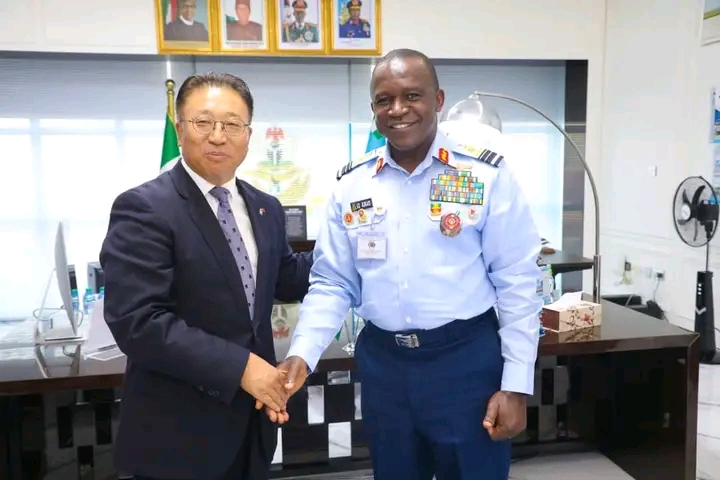 The Chinese Ambassador to Nigeria, His Excellency Cui Jianchun, was at Headquarters Nigerian Air Force yesterday, 20 December 2022, on a ‘thank you’ visit to the Chief of the Air Staff (CAS), Air Marshal Oladayo Amao over the rescue of 7 Chinese mine workers at Birnin Gwari, Kaduna State.

This was disclosed by the Director of Public Relations and Information, Nigerian Air Force, Edward Gabkwet.

While expressing his gratitude to the CAS for his leadership which has translated to the commitment of NAF operational forces in the counterterrorism efforts, Ambassador Jianchun noted the high level of professionalism exhibited by the NAlearnedial Forces that undertook the rescue mission.

According to the Ambassador, “From what I learned, your Special Forces conducted themselves in the most professional manner worthy of praise and emulation. This was possible because of the current kind of leadership that the Nigerian Air Force and indeed the Armed Forces of Nigeria have.”

Responding, Air Marshalremainsinformed the Ambassador that the NAF, alongside other security agencies in the country, remain committed to providing a peaceful and safe environment for both Nigerians and foreigners to thrive and will not rest until all areas are rid of terrorists and other criminal elements.

According to CAS, “Nigeria remains open to all foreigners who want to come and invest, and they can be rest assured of their safety as we will continue to ensure that our country remains attractive for foreign investors.”

Recall that 271 Nigerian Air Force (NAF) Detachment, Birnin Gwari, Kaduna State, carried out a rescue operation in the early hours of 17 December 2022 leading to the rescue of 7 Chinese expatriates earlier kidnapped and held hostage by terrorists operating in the general Area. The rescued Chinese victims were kidnapped in June 2022 by terrorists while working on a mining site in Ajata-Aboki, Gurmana Ward of Shiroro Local Government, Niger State.