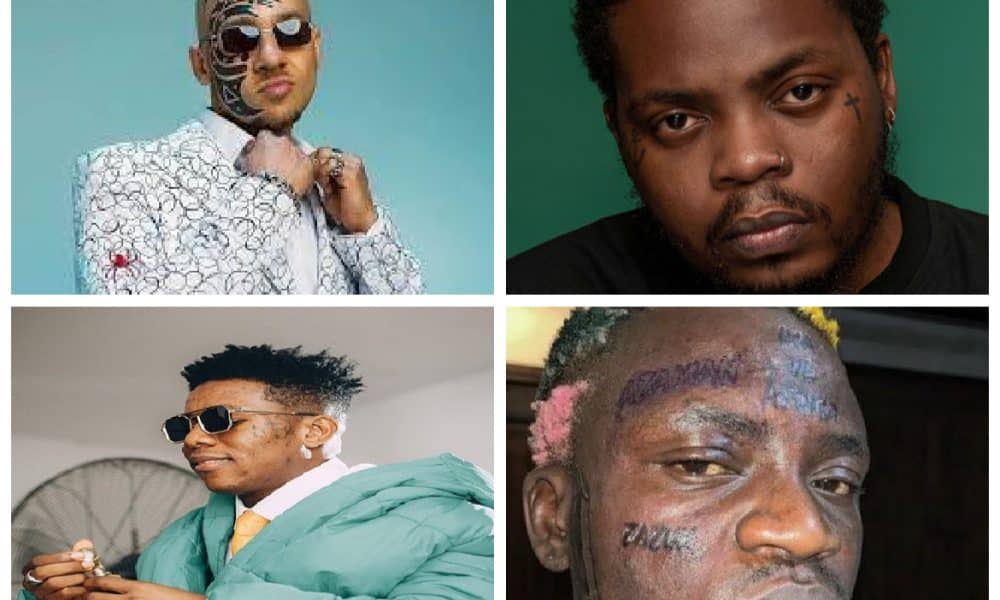 Wikipedia defines a tattoo as a form of body modification made by inserting tattoo ink, dyes, and/or pigments, either indelible or temporary, into the dermis layer of the skin to form a design.

The history of tattooing goes back to Neolithic times, practised across the globe by many cultures, and the symbolism and impact of tattoos vary in different places and cultures. Tattoos may be decorative (with no specific meaning), symbolic (with a specific meaning to the wearer), or pictorial (a depiction of a specific person or item). However, in modern times people choose to be tattooed for artistic, cosmetic, sentimental/memorial, religious, and spiritual reasons, among others. In the entertainment industry, artists tattoo themselves for diverse reasons and it has become the order of the day. Celebrities get tattoos on different parts of their bodies including their faces. Lets’s examine four Nigerian celebrities that have tattoos on their faces.

Habeeb Okikiola popularly known as Portable was born on March 12, 1994, is a Nigerian singer, rapper and songwriter. Before now, aside from the tattoos on his body, the “Zazu” crooner had just an ‘SOS’ tattoo on his face, located on his chin. But he recently shared a video of the painful process as he acquires a new set of tattoos in Cyprus.

Olamide Gbenga Adedeji was born March 15, 1989. He is a rapper, singer and songwriter. He is one of the biggest and most influential artists in Africa. He records in Yoruba and English. Olamide in February 2019, showed off his facial tattoos while dancing to his single, ‘Woske’ on Instagram.

Adekunle Temitope popularly known as Small Doctor was born on May 27, 1996. He is a Nigerian Fuji, and afro-pop recording artist and performer. Small Doctor was preceded by the release of another single: “Penalty” which won an award for “Best Street Hop” at The Headies 2018 He got his face tattoo in the wake of his career.

Thomas Amar-Aigbe popularly known as Dj Sose was born on June 5, 1981. He is an award-winning Nigerian-Hungarian disc jockey known for his unique facial tattoos. DJ Sose shocked the world when he removed his tattoos during his traditional marriage but fixed them back during the white wedding.