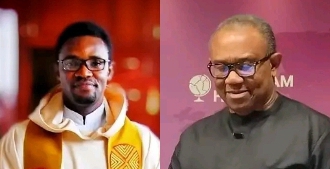 Following what many Nigerians in the diaspora have described as a superb outing, Reverend Father Kelvin Ugwu has described the Labour Party Presidential Candidate, Mr. Peter Obi as the epitome of a disciplined man and distinguished personality with the gift of moral discernment.

Fr. Ugwu reacted to the manner in which Mr. Obi consistently approaches issues in a bid to assuage the myriad of issues confronting Nigeria if he is elected the President.

According to Fr. Ugwu, the man (Mr. Peter Obi)is so blessed with the gift of discernment that comes to him naturally and spontaneously

“Mr. Peter Obi is an example of one who is truly disciplined and unbelievably consistent in all he does. Even we ministers and preachers, only very few of us can match such a level of discipline. As a Christian, Obi is, take it or leave it, a standard of most of our moral teachings. He has shown a high level of moral responsibility. I can’t help but admire him greatly.

“This man is so blessed with the gift of discernment that comes to him naturally and spontaneously. All his decisions, his choice of words, his answers to questions, and his approach to issues may look simple to the eyes, but deep down if you take time to reflect on any of them, they are beyond simple. They radiate godliness and it is safe to conclude that God is truly the one directing him.

“Obi is doing Nigeria and Nigerians and indeed the entire Africa a favour by coming out to contest the presidential election of 2023. If other countries in Africa can have him, even if it is for one year, I bet you, they will be excited about it.

“To be clear, you can vote for whomever you want to vote for in the coming elections, that is why it is a democracy. It is just unfortunate that the downside of democracy is that id!ots too have the same right to vote as sensible people. But my humble advice to the many sensible people reading me is, to make every effort to cast your vote and ensure it is counted. Then, if Obi did not win, make sure you LEAVE Nigeria, what most of you call JAPA (the Yoruba word for “to flee”, “to run”, or “to escape”). Start having your plan B now. Nigeria is a crime scene, only “someone who isn’t a criminal can rescue her. And if Obi did not win, you owe it to yourself to preserve your life.”