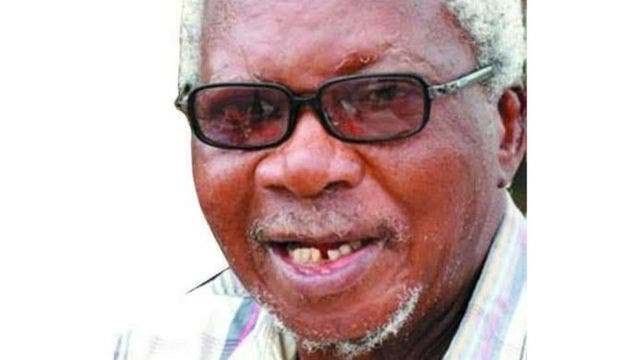 The deceased was the younger brother to elder statesman and Ijaw national leader, Chief Edwin Clark.

The terse statement issued by the family read: “The Clark-Fuludu Bekederemo family of Kiagbodo town, Delta State, wishes to announce that Emeritus Professor of Literature and renowned writer, Prof.

John Pepper Clark, has finally dropped his pen in the early hours of today, Tuesday, 13 October 2020.

Clark was born on December 6, 1933, in Kiagbodo, to an Ijaw father and Urhobo mother.

Clark received his early education at the Native Authority School, Okrika (Ofinibenya-Ama), in Burutu Local Government Area (then Western Ijaw) and the prestigious Government College in Ughelli, and his BA degree in English at the University of Ibadan, where he edited various magazines, including the Beacon and The Horn.

Upon graduation from Ibadan in 1960, he worked as an information officer in the Ministry of Information, in the old Western Region of Nigeria, as features editor of the Daily Express, and as a research fellow at the Institute of African Studies, University of Ibadan.

In 1982, along with his wife Ebun Odutola (a professor and former director of the Centre for Cultural Studies at the University of Lagos), he founded the PEC Repertory Theatre in Lagos.

A widely travelled man, Clark had, since his retirement, held visiting professorial appointments at several institutions of higher learning, including Yale and Wesleyan University in the United States.

Clark was most noted for his poetry, including Poems (Mbari, 1961), a group of 40 lyrics that treat heterogeneous themes; A Reed in the Tide (Longmans, 1965), occasional poems that focus on Clark’s indigenous African background and his travel experience in America and other places; Casualties: Poems 1966–68 (USA: Africana Publishing Corporation, 1970), which illustrate the horrendous events of the Nigeria-Biafra war and A Decade of Tongues (Longmans, Drumbeat series, 1981), a collection of 74 poems, all of which apart from “Epilogue to Casualties” (dedicated to Michael Echeruo) were previously published in earlier volumes;

Others are: State of the Union (1981), which highlights Clark’s apprehension concerning the socio-political events in Nigeria as a developing nation and Mandela and Other Poems (1988), which dealt with the perennial problem of ageing and death.

Meanwhile, President Buhari has extended deepest condolence on behalf of the federal government to the Clark-Fuludu Bekederemo family on the passing of the renowned writer.

Buhari in a statement issued by his spokesperson, Mr. Femi Adesina, paid tribute to one of Nigeria’s finest poets, dramatist and recipient of the Nigerian National Order of Merit Award for literary excellence, whose repertoire of published works depicts the hard work of a great man, devoted to a lifetime of writing, knowledge and promotion of the indigenous culture of the Ijaw nation.

Acknowledging that Clark’s exit has, indeed, left an indelible mark in the literary world, “President Buhari takes solace that his body of literary works, which earned him recognition and respect both at home and abroad would continue to inspire upcoming Nigerian writers to pursue literary excellence and flourish in their chosen vocation.

“The president’s thoughts and prayers are with the family of the departed patriot, the government and people of Delta State and the literary community in the country.”

Obaseki expressed a deep sense of shock and foreboding over the sad news.

Obaseki described Clark as a great academic and a celebrated poet, who contributed immensely to Nigeria’s advancement through his numerous works.

“His literary exploits brought honour and great respect to Nigeria and his contributions to literature and education, in general, will outlive many generations.

“His writings mirrored society all through our development as a nation and he raised his pen when it mattered the most to condemn societal ills that threatened our collective existence and advancement as a nation as well as a continent,” Obaseki said.

In a statement by his Chief Press Secretary, Mr Olisa Ifeajika, in Asaba, Okowa said the literary world had lost an enigma whose works would continue to dominate the contemporary Nigerian society.

Describing his passage as a great loss to the country and the literary world, the governor extolled the immense contributions of the late writer to the growth and development of literature in Nigeria, Africa and beyond.

He said: “The literary works of Professor J.P. Clark promoted Delta, Nigeria and Africa, hence his demise is being celebrated by lovers of literature all over the world.

“As a serial award-winner in poetry, the late Prof. Clark was a consummate patriot, a great literary icon and a teacher par excellence, whose literary publications inspired deep thoughts, especially on social-economic and political themes.

“On behalf of the government and people of Delta, I commiserate with the Clark-Fuludu Bekederemo family over the passing of renowned poet, literary giant and playwright, Emeritus Professor John Pepper Clark.

“He will be sorely missed by all whose lives he affected in many ways with his literary works.”

Okowa urged all who mourn the demise of the late professor to take solace in the fact that he “remains alive through his literary works.”

He prayed to God to grant his immediate family, the Ijaw nation and lovers of literature, the strength to bear the irreparable loss, pointing out that his numerous achievements in the literary world would continue to be remembered.