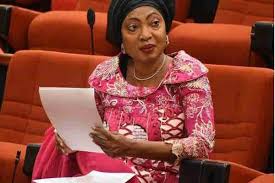 Senator Rose Oko is dead, Chairman Senate Committee on Trade and Investment, She was aged 63.She died in a UK hospital last night.

A second term Senator, she was elected into office as the first female representative from her Senatorial District in June 2015 and re-elected in 2019.

Before her elevation to the Red Chamber,  she represented Yala/Ogoja Federal Constituency in the  House of Representatives in the  7th National Assembly.