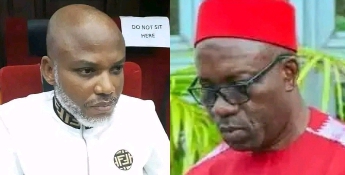 It was supersensitive atmospheric situations in Awka, Anambra State, as the All Progressives Grand Alliance APGA, flags off National Campaign.

The event will remain indelible to many as the Governor of Anambra State Prof. Charles Chukwuma Soludo called on the Federal Government to immediately release the embattled leader of the Indigenous People of Biafra IPOB, Mazi Nnamdi Kanu, from the custody of the Department of State Service.

In a viral video, Gov. Soludo who is currently appointed as the National Chairman of the All Progressives Grand Alliance APGA affirmed that the immediate release of Kanu would bring a significant atmosphere of peace and tranquility to the Southeast.

He, however, promised to stand surety to Kanu and provide shelter for him in Awka to ensure that he is made available to the authority whenever he is called.

His words: “if the detained IPOB leader cannot be released unconditionally, he should be released to him saying he is ready to stand surety for him.

“I am making a passionate appeal to the Federal Government to release Mazi Nnamdi Kanu unconditionally. If he cannot be released unconditionally, I want him released to me and I will stand surety for him”

Consequently, the statement of the governor has triggered mixed reactions from the Nigerians and Biafrans in the diaspora

Meanwhile, a lot of people have applauded Gov. Soludo, describing his statement as timely and necessary.