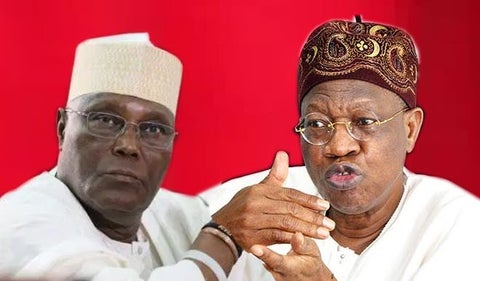 The Federal Government says the alarm and doom predictions by former Vice President Atiku Abubakar on the country’s debt profile is anchored on a false premise.

The government position is contained in a statement issued on Wednesday in Abuja by the Minister of Information and Culture, Alhaji Lai Mohammed.

The statement was signed by Mr Segun Adeyemi, Special Assistant To The President (Media), Office of The Minister of Information and Culture.

In the statement, the minister stressed that the scenarios on the country’s debt profile as painted by Atiku in a release he issued on Tuesday had no basis.

Mohammed said while the Federal Government welcomed constructive criticism, such must be based on verifiable facts rather than “conjectures and innuendos’’.

“There is no doubt that former Vice President Atiku Abubakar loves our country and wishes it well, otherwise he would not have sustained his serial quest for the country’s highest position.

“One can only hope that his resort to the use of such words as ‘precipice’, ‘foreclosure’

and ‘economic ruin’ does not reflect anything but best wishes for the country at this time,” he said.

The minister explained that the figure of Nigeria’s debt to revenue ratio of 99 per cent in the first quarter of 2020, quoted by Atiku was not in the Medium-Term Expenditure Framework and Fiscal Strategy Paper, where he claimed he got it from.

“We are also not able to ascertain the source of the first quarter figures of N943.12 billion for debt servicing and N950.56 billion for retained revenue, which he also quoted,” he said..More in Home

The minister said the debt service provisions in the annual budgets include principal repayments, interest payments and all other applicable charges.

“Therefore, the statement that debt servicing does not equate to debt repayment is not only wrong, but ill-informed,” he said.

On the former Vice President’s assertion that revenue needed to go up, Mohammed said the administration had introduced several measures to shore up revenues.

He listed some of the measures as the passage and implementation of the Finance Act, 2019, various on-going reforms in the Oil and Gas sector, Tax Administration and Collections, as well as the Strategic Revenue Growth Initiatives.

According to Mohammed, Nigeria’s debt service is expressly provided in the annual budgets and the debt service payments are made as and when due.

He said based on provision and the payments, the issue of creditors foreclosing on Nigeria as predicted by the former Vice President did not arise.

ratios of debt to GDP and debt service to revenue as posited by Atiku.

Mohammed added that the Government is making concerted efforts to increase revenue so as to bring down the ratio of debt service to revenue.

“One of the reasons why debt service to revenue is high is because revenue generation in Nigeria has been low, with over-dependence on the oil sector.

“This is corroborated by the fact that the ratio of Nigeria’s tax revenue to GDP is one of the lowest in the world at about six per cent,’’ the minister said.

Mohammed said unlike what obtained in the past, when the nation borrowed to “service the crass indulgence of a few fat cats”, the loans being obtained by the current administration were being primarily used to finance infrastructure projects: roads, railways, bridges and power.

He added that the loans also were long-term in nature, which would benefit present and future generations.

“We have said that in the face of massive infrastructural decay, no responsible government will sit by and do nothing.

“This administration’s borrowing, therefore, is aimed mostly at revamping our infrastructure.

capital while the loans for the agricultural sector will help the move to diversify the economy,” he said.

The minister said in spite the negative impact of the Covid-19 pandemic on the country’s economy, the Federal Government had continued to take measures to mitigate effects of the pandemic.

He assured that the government would always act in the best interest of Nigerians. (NAN)