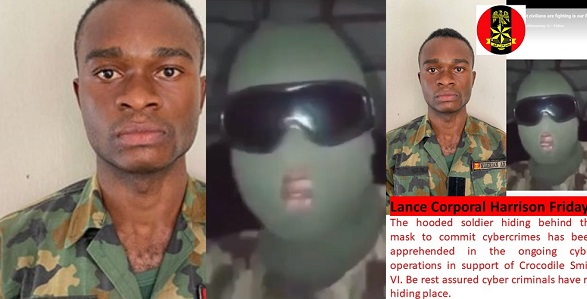 The military has accused a masked Nigerian soldier of cybercrimes who posted a video online appealing to his colleagues to not be aggressive with peaceful demonstrators.
Lance Corporal Harrison posted a 3-minute online clip earlier this week on Friday asking soldiers to be careful with demonstrators if they are deployed to disperse protests.

Over the past two weeks, thousands of Nigerians have been demonstrating nationwide to demand substantive police reform and, more generally, better governance.

In the video on Friday, he said he had intelligence reports that military forces could soon be deployed to end the demonstrations.

He appealed to his colleagues for professionalism because they would all profit from the outcome of the demonstrations.

Army crackdown in Lagos on peaceful demonstrators
Hours after soldiers were suspected of shooting and killing demonstrators in Lagos, the Army announced Friday’s arrest.

Millions were shocked on Tuesday night when, during a peaceful sit-in protest at the Lekki-Epe toll gate, demonstrators were shot with live ammunition.

According to eyewitnesses, at least seven people were confirmed dead by eyewitnesses, and several others were injured after soldiers opened fire on unarmed protesters in the dead of the night.

“The Nigerian Army has relentlessly claimed that its soldiers were responsible for the” False News “massacre on Tuesday.

However, to clarify its presence, the military establishment has refused to release a detailed statement.

While Babajide Sanwo-Olu, the governor of Lagos, reported that there were no casualties, he stated that the men and officers of the Nigerian Army were still deployed to the toll gate where the ugly incident on Tuesday night took place.

He said he ordered an inquiry into the involvement of the Army in the events on Tuesday night.
“This is in order to take this up with the higher command of the Nigerian Army and to seek Mr. President ‘s help in his capacity as Commander-in – Chief to unravel the chain of events that took place last night,” he said.

Hillary Clinton, the former U.S. Secretary of State, strongly denounced the attack and called on President Muhammad Buhari and the military to stop killing demonstrators.