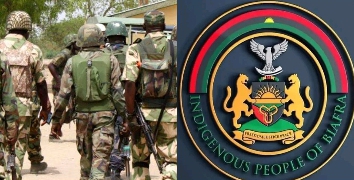 Nigerian security agencies have said that the Indigenous People of Biafra, IPOB, has failed in its quest to attack innocent persons and cause heavy damage without being countered.

Knowledgeable security sources disclosed this on Saturday. A Source gathered that Nigerian security forces have intercepted IPoB’s drone and IEDs.

“The IPoB elements have gone to the extent of importing a deadly attack drone into the country to cause maximum damage to lives and property. They bought the attack instrument but described it as farm equipment to escape scrutiny but they got it wrong.

“These fellows have also mounted Closed Circuit Television cameras on telecommunication masts within their camps which are situated in undulating locations, to monitor security forces to be able to attack innocent persons and cause heavy damage without being countered.

“As if this anti-people action was not enough, they also routinely ring their main camps between Anambra and Imo with explosives to deter anyone from getting close and preventing their nefarious activities.

“We have discovered that the deployment of the IEDs and the attack drone was to cause maximum damage to human beings and property and ward off any form of counterattack by the security agencies. But they have failed and will continue to fail in their dastard acts.

“We have continued to interrogate some of the suspects arrested in connection with these actions, which portend grave danger to the people of the area, where these criminal acts are being perpetrated,” the top official said.