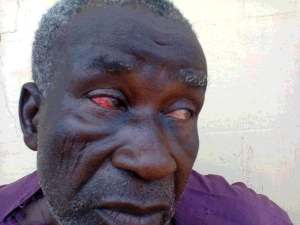 The long revered honour and courtesy extended to the old in Igbo land was desecrated, recently, after some hoodlums masquerading as members of neighbourhood watch descended on a 90-year-old man, Chief John Ali and beat him to pulp at Ebe-Ette community in Igbo-Eze South Local Government Area of Enugu state over ownership of land.

As if the beating was not enough, while the matter was still pending in court, the police in the area connived with the man at the center of the land case and turned around to charge the old man to court for allegedly giving police false information.

As it stands, the old and feeble man is being dragged from one police station to another almost on a daily basis with a view to forcing him to denounce his ownership of the land and withdraw his earlier complaint about the merciless beating meted on him.

Saturday Vanguard gathered that trouble started in 2017 when one Odumegwu from Enugu Ezike, Igboeze North local government area allegedly claimed that he bought the parcel of land from one Ameh Egbo, a native of Orokam in Ogbadigbo,  Benue state.

However, the old man under whose care the land was entrusted as the oldest man in the community challenged the transaction and that infuriated the people involved in the transaction.

It was learned that after all efforts to make the old man accept their term failed, they decided to use force and allegedly engaged the services of a group of young men that masqueraded as members of neighborhood watch, stormed the house of the old man and descended on him. They also confiscated his properties including a motorcycle for weeks.

Narrating his plight in a petition addressed to Enugu State police boss, the nonagenarian stated that the said Odumegwu used the services of the police at Igbo Eze North police division, Ogrute, Enugu- Ezike and members of Igbo Eze North vigilante group to harass, intimidate, arrest and detain him over the disputed parcels of land.More in Home

According to him, “Odumegwu had earlier approached me as the oldest man of Ebe- Ette community to take over the parcel of land but the request was turned down. Ever since then, the gang vowed to kidnap and kill me, a threat they carried out on several occasions by roughly beating me up after which I was hospitalized. They later, orchestrated my detention at Zone 9, Umuahia, Abia state.

“While I was still in the hospital they also went to my farm on the said expanse of land, destroyed my cash crops, and cut down my economic trees which were my only means of livelihood. Upon my discharge from the hospital, the gang threatened to kidnap, kill me and all members of my family.

“There are seven suits over the matter pending in Enugu state high court at Enugu Ezike judicial division without mention after several petitions to the police without investigation.

“Ironically, after all the beating they meted on me, police in the area failed to investigate the matter.  They only gave me a paper to go and treat myself in the General hospital and that was all.

“Shockingly, after that, they just charged the matter to court and I was arraigned for giving the police false information through my petition.”

“Dissatisfied with the police action, I petitioned the Inspector General of Police and stated that the land was inherited by my family.

I also instituted a case in court against the incessant arrests, intimidation, harassment and detentions. In 2016 we instituted an action at Enugu state high court through which we sought the enforcement of our fundamental rights of personal liberty and dignity of human person. However, even after the suit, the gang continued to harass, intimidate and torture me and others in connivance with the police at Ogrute and men of the vigilante group over the parcels of land.

“Interestingly, while the suit was still on, they quickly mobilized workers to site on the large expanse of land with construction equipment, bulldozed and erected fence and a building which they called factory. They painted the new building with police colors claiming that they have concluded plans to donate it to the police over their assistance to him.”

He, therefore, appealed to the Inspector-General of Police to intervene over the case and ensure justice, alleging that the police in Enugu state has taken sides with his oppressors.

He said that he lacked the powers to comment on a matter pending in the court of law, adding that if any false information is published in any medium against him, he would sue the medium.

He denied ever beating the 90 years old man, saying that all his claims were false and unfounded.

He, therefore, requested vanguard to visit his office in Enugu for a true picture of the story as he would not like to speak on phone over the matter.