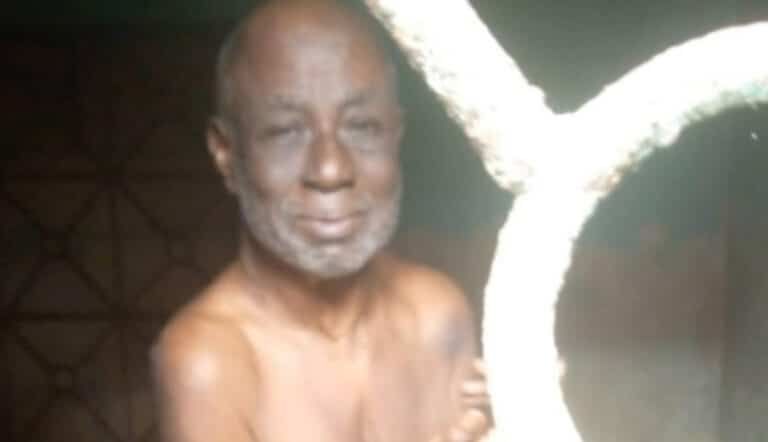 A 67-year-old man identified as Ibrahim Ado who was locked up for twenty years in Benin street in the central part of Kaduna state metropolis has being rescued by environmental officers on Wednesday.

The environmental officers who found the aged man said that they were shocked by the discovery. The environmental officers who pleaded anonymity said that they came to the house to look for beverages and that was when the man was discovered. According to their spokesman, “Today we came to this house in search of beverages that were usually kept in residential houses without proper storage facilities when we saw a naked man locked up in a room. “We found that he was in an uncomfortable position. The odour coming out from the room was unbearable.” Mohammed Jalige, the state police spokesperson, also confirmed the development to The Cable on Wednesday. He said, “Today, being the 12th day of October, 2022, in the afternoon, we received information from a team of community health workers working in the metropolitan who were out for duty that they went to certain houses located at Bayajidda road. “After accomplishing their assignment, they noticed someone was peeping through the window and the room was locked with a padlock. The room was dark and so they tried to open the door. “After spending a few minutes trying to open the door, they succeeded and saw an old man seated on the floor naked with no clothes. “Going closer to the room, the room was smelling — a clear indication that the man had been there for so many years or he must have spent a lot of time in the room.” Speaking further, he said when they got a call about the situation they immediately mobilized officers to the area to rescue the man and rushed him to the hospital. When asked to confirm the duration of the Ado’s disappearance, Jalige said the police only have information from relatives. “We cannot say that It was part of the information that we received from that place, that the man was there for almost 20 years. But we cannot lay our hands on any of his immediate family members to tell us for how long he has been there and why they decided to treat him that way. “He cannot tell us how long he has been there only that he knows he has been in the room for a very long time. “So, maybe if we eventually get his wife or his children, that is when we will eventually know how long he has been in that room. “I believe as we commence investigation, things will unfold and we’ll eventually get to the root of the matter,” he replied.