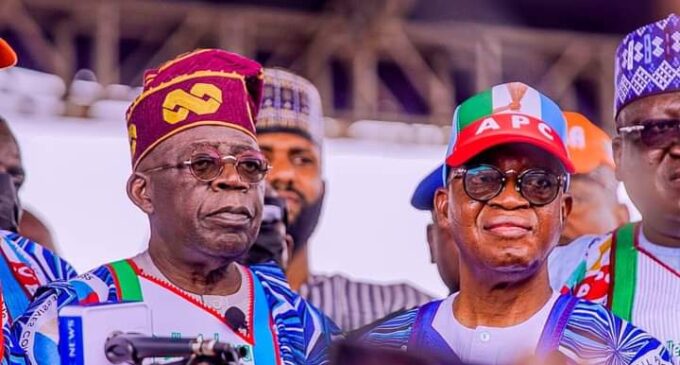 The presidential candidate of the All Progressives Congress (APC), Bola Tinubu, is reportedly set to officially begin his campaign in Ilorin, Kwara State capital.

Naija News learned that Tinubu alongside the Progressive Governors Forum, Presidential Campaign Council and members of the APC National Working Committee chose Kwara as the first place to launch the campaign. An APC chieftain, in a chat with The Punch, said the APC stakeholders chose the state during last Wednesday’s tripartite meeting held at the Transcorp Hotel in Abuja. The chieftain, who is one of Tinubu’s loyalists, disclosed that the former Governor of Lagos State and the stakeholders agreed on Kwara state was chosen after careful permutation. He, however, stated the presidential candidate and the stakeholders failed to agree on a date to kick off the presidential campaign in Ilorin. He said, “The candidate and the stakeholders deliberated consciously on the issue, considered the odds before they finally agreed on the choice of North Central in general and Ilorin specifically. “It will be the starting point for our campaign before we spread into other areas. But the date has not been agreed on.” When contacted on Friday, the spokesperson of the APC Presidential Campaign Council, Festus Keyamo,  failed to confirm if the campaign will be launching from Ilorin. He said, “We cannot confirm anything now. Though it is not a disclaimer, there is no official release on that.” Also, the PCC Director of Media and Publicity, Bayo Onanuga, refused to confirm the news, saying that the party will make the announcement. Onanuga added that the party will be unveiling Tinubu’s manifesto this week and will also be revealing the presidential campaign council. “Why don’t you wait? The party will announce it. I cannot confirm anything with you on this. You guys (media) should wait for us to unveil the manifesto and the PCC this week. That’s what we plan to do first,” he stated.