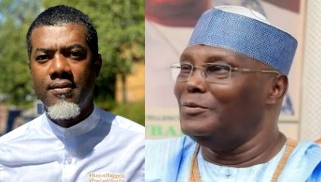 A former aide to former president Goodluck Jonathan, Mr. Reno Omokri, has averred that the presidential candidate of the Peoples Democratic Party, PDP, Atiku Abubakar is the only candidate that has what it takes to put smiles on the faces of the Nigerian Workers when he becomes the president of the country.

Omokri disclosed this in his 80th series on why he believes Nigerians should vote for Atiku as the next president.

According toOmokiri, the Atiku’s government will provide enabling laws that would promote healthy development and an industrial environment nationwide.
His words:
“Day 80 of #WhyShouldIVoteAtiku: The Nigerian worker is not well paid. At all. And no candidate is addressing that beyond giving vague signals. Only Waziri Atiku Abubakar has given a firm commitment that under his administration, Nigerian workers will earn a living wage.

In Waziri Atiku Abubakar, the Nigerian Labour Congress, and the Trade Union Congress of Nigeria, and their affiliates have an assurance that adequate labour laws would be enacted to promote a healthy industrial environment nationwide. This much is spelled out in the Atiku policy document and his ‘My covenant with Nigerians’.

Neither Bola Tinubu nor Peter Obi has articulated their plans for the Nigerian worker in such detail. Quite the reverse. They have both taken very anti labour stances in the past. There is the 13-month doctors’ strike under Peter Obi in Anambra. And the strike at the Lagos State University under Bola Tinubu as Lagos Governor even led to a loss of life.

Only the most inhumane leader will allow doctors to go on strike for 13 months, as happened in Anambra under Peter Obi. Think of the number of people that died as a result of lack of access to healthcare during that time. Nigeria needs a humane leader in Aso Rock in 2023.

And that is why I urge you and your family and friends to please vote for Waziri Atiku Abubakar and the Peoples Democratic Party on Election Day, Saturday, February 25, 2023.